Spending time with the Elder Gods and his allies.

Training with Earthrealm warriors, especially with Liu Kang and Kung Lao.
Proecting Earthrealm.
Doing anything to stop evil.
Helping others even when they don't want his help.

Protect Earthrealm from tyranny of Shao Kahn and Shinnok, even it involves altering the reality.

Use Shinnok's dark powers to stop threats and attacks on Earthrealm.
Defending Earthrealm and allied alternate Earth from other invading worlds and beings before they become a threat.
Claim and use the god-like powers of Blaze to destroy enemies of Earthrealm (all succeeded).

Spending time with the Elder Gods and his allies.

Protect Earthrealm from external forces at any and all costs.

Use Shinnok's dark powers to stop threats and attacks on Earthrealm (currently).
Use the god-like powers of Blaze to destroy threats and protect Earthrealm.

Although being formless and eternal, Raiden often takes human form on mortal planes. As such, he appears as a fully-grown man wearing predominately white robes and a blue vest, his face usually shadowed by a straw hat. The effect is enhanced by his glowing blue eyes that radiate with electricity and long white hair, befitting of his god-like status. In Mortal Kombat: Deadly Alliance, one of his outfits is finished by a flowing blue cape. Lastly, his power is so great that he constantly radiates with lightning energy, electricity constantly dancing and crackling around his being.

In Deception and Armageddon, his visage is warped by Onaga's malevolent aura when he sacrifices himself, reforming as a dark warrior dressed in black robes and dark armor, his eyes changed from a soothing blue to a belligerent red. His cape was changed to a subdued red and appears tattered at the end. Due to the events of Mortal Kombat (2011), this change was rendered null. However, he seems to return to this form in the post-credits scene of Mortal Kombat X, though now he wears Shinnok's Amulet.

Raiden's godhood and duty to protect Earthrealm makes him a somewhat cold individual as he refuses to get close to humans, something him and his brother disagree on. He is very dedicated to protecting Earthrealm and will do whatever it takes (even trying to literally make a deal with the devil) to ensure it's safety. Raiden serves as a mentor to many kombatants mainly due to his wisdom and hopeful outlook. Him never giving up on the elder gods was the main reason he stoped Shao Kahn in Mk9 and he put immense faith in Liu Kang to reshape the timeline in a good way in Mk11. Despite his best efforts to keep a dutiful life of protecting Earthrealm he ended up forming actual bonds with the humans, seeing Kung Lao and Liu Kang as his son's, forming strong friendships with Nightwolf and Bo' Rai Cho and offering great wisdom and inspiration to the other Earthrealmers.

Another Darker side of raiden is his wrathful side. He was ready to kill Shao Kahn after his murder of Kung Lao and turns completely Anti-Hero in MKX with corruption of the jinsei temple, turning him into dark raiden, a more wrathful angry side of Raiden that will eliminate all threats to earthrealm without a second thought.

Raiden is extremely powerful, being a god of thunder and can use lightning as his weapon, able to fire it as concentrated blasts or torrents. He can also fly and one of his attacks is to fly at his opponent and drive them into walls. Raiden can also become ethereal, allowing him to teleport and possesses a lightning staff that he can use to fight with. Despite being a god, he is not invincible and has his limits, though it does not seem as if he can ever be fully killed.

Raiden, like all other gods, loses his powers when he enters a realm that is not native to him, but he will regain them when he leaves. He can also take on a mortal form so as to be allowed to take part in Mortal Kombat tournaments. 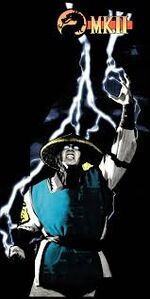 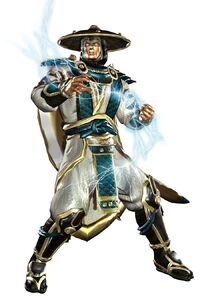 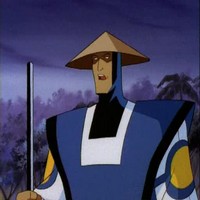 Raiden in Mortal Kombat: Defenders of the Realm. 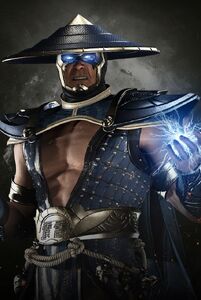 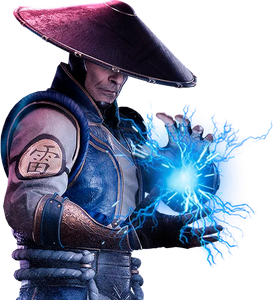 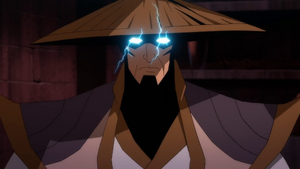