NOTE: This article is about the incarnation of Raiden from the Mortal Kombat Legends films. The mainstream version can be found here: Raiden (Mortal Kombat).

Spending time with the Elder Gods.

Protect Earthrealm from Shao Kahn by winning the tournament.

Raiden is the tritagonist of the 2020 animated martial arts film, Mortal Kombat Legends: Scorpion's Revenge, which is based on the classic Mortal Kombat video game series. He is the god of thunder and protector of Earthrealm who mentors Liu Kang so he can win the tournament to prevent Shao Kahn from merging with Earthrealm.

He is voiced by Dave B. Mitchell.

One night, at the Shaolin Temple, Liu Kang was sitting on the ground that his meditating with the way. When the several candles are blown out Liu Kang eventually noticed that it was Raiden, the thunder god and protector of Earthrealm who told him to be ready before they attended the first Mortal Kombat tournament hosted by the fading wizard, Shang Tsung. Liu Kang agreed to it and Raiden vanished using his lightning power to light all the candles.

During the journey, Liu Kang and Raiden are taking the ship and with Sonya Blade and Johnny Cage to the tournament, and they welcoming both of them with Johnny Cage having trouble getting Raiden's name right.

During the tournament, Raiden stops Goro from killing Jackson Briggs as the tournament has not even started yet. When Scorpion tries to steal Shinnok's amulet for Quan Chi, Raiden convinces him to step down saying that he has a choice.

Throughout the rest of the tournament, Raiden is seen in Shang Tsung's throne room watching the tournament from the side. Liu Kang eventually makes it to the throne room and battles Goro, but ends up losing. Scorpion, however, shows up and kills Goro making him the champion Liu Kang has to face, but taking Raiden's advice he yields giving Liu Kang and Earthrealm the victory and preventing Shao Kan from invading Earthrealm. Shang Tsung tries to kill them in rage, but Raiden threatens him now no longer not allowed to get involved causing Shang Tsung to flee.

Shang Tsung's island collapse with Raiden, Sonny, Johnny and Liu Kang getting out on the boat. Liu Kang is disappointed that he lost to Goro, but Raiden reassures him it is not his destiny to defeat Goro but someone else referring to Shao Kahn. 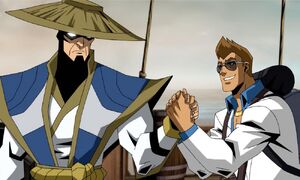 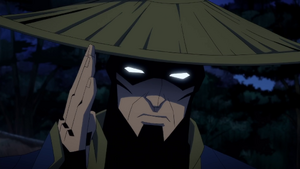 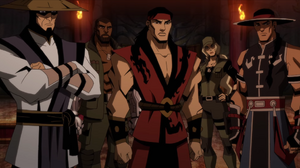