Raiden is an international human military faction that serves as a main heroic organization in Raiden series. It is a manufacturer of their successful fighters called Raiden MK. II and its blue counterpart with "Beta" letter at the end of another title. Before the war with Cranassians, they will scramble their predecessor and later fighters such as Fighting Thunder ME-02.

In the first Raiden game, they were created about year 2090 A.D. to repel invading Cranassians. The alliance was responsible for creating Raiden Mk. II and its blue counterpart. With many Cranassian weapons destroyed, Earth made use of the aliens' technologies, to create new military forces, which used Cranassian-based weapons, thus forming a stronger military power. With the two newly created starfighters The alliance managed to thwart Cranassian invasion twice in Raiden I and II.

The time of 17 years had passed already after a war of a crystal started with the mankind.

Players will enter a critical phase for the Cristal War.

Richard Maxwell, nicknamed "Max", is one of the main protagonists of Raiden V. Max is english voiced by Xander Mobus, who also japanese voiced by Kanehira Yamamoto.

He is the captain of the Bellwether, the airborne aircraft carrier where the Fighting Thunder fighters reside. He despises war and often questions why he has to fight or why he is a soldier, having lost so many comrades in battle. Outside of battle, he spends most of his free time drinking coffee or solving jigsaw puzzles. He is 42 years old of American heritage. Whwn he was young he joined US Air Force in hopes of flying the sky, but retired when he constantly carried out missions involving numerous deaths and destruction. Maxwell is forced back into service when he is ordered by his air force superior to command USAF's latest spaceship Bellwether.

He was also the man behind the codename "Raiden", as he didn't liked the name Fighting Thunder.

Eshiria Portman is one of the main protagonists of Raiden V. She is English voiced by Rina Hoshino & Japanese Voiced by Ayaka Imamura. In the game, she serves as an operator aboard the Bellwether, and she often assists the player in giving information on the enemy crystals and judging him or her by their performance in the game.

Portman is 26 years old and is of Romanian heritage. When was a child, her house was close to air force base. Portman dreamed of joining the ait force despite her parents' objections. She had a brother 3 years older than her who became the air force pilot. When she became 15, she turned on the state-owned television to hear about the situation of the Crystal War: what she heard was not of glorious triumph, but her infuriated brother raging at his superior for a mission went horribly awry, resulting senseless deaths of all his compatriots. Portman made decision to go to university majoring in communication. Some time before the events of Raiden V Portman joined VCD unit, and was given her task at Bellwether commanded by Richard Maxwell who is famously known as 'The Death'.

Helga Lindenbaum is a 54 years old woman from Germany. She lived a life of ordinary housewife until a mysterious Energen Crystal dropped on top of camping site, resulting deaths of 50 people. Among the dead was her husband.

But her suffering did not end there: a month later her son joined World alliance military to participate in the Crystal War, only to be killed in action a month later. For the next several months Helga went into a state of deep depression, but ultimately she overcame her grief and entered the world of politics. Helga turned out to be surprisingly gifted at politics: she later went to become UN representative of Germany and is subsequently promoted to a member of UN Peacekeeping Committee.

She is English voiced by Laura Post & Japanese Voiced by Amano Mami.

Vanessa Hornet is 28 years old, of Portuguese heritage. When she was a child she was sold off to modern day pirates. Vanessa had been living as modern day pirates since. She eventually became the captain of her own pirate crews and earned the infamous alias 'Valbarossa Hawkeye'.

Initially she had zero interests in involving in Crystal War and lived her life by raiding on supplies and arsenals of military shipments. She was initially hostile to World Military Alliance for good reasons. However her neutrality did not stay very long when Crystal War spilled onto her own turfs and began to threaten her own life. Besides World Alliance Military, even with Raiden starfighters trio still needed as many help as they can get. To liberate ports occupied by Vanessa from Crystal arsenals they asked her cooperation and she accepted. But the alliance asked her one but cruel condition: Vanessa is to purge and undo her own organization and its members. Among the purged by Vanessa was her own husband. She has an animating and large-hearted personalities. 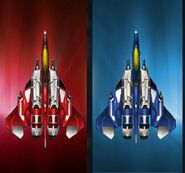 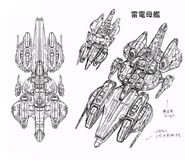 Mothership in Raiden III and onward

Retrieved from "https://hero.fandom.com/wiki/Raiden_(organization)?oldid=1806856"
Community content is available under CC-BY-SA unless otherwise noted.