To keep the Xiaolin Temple safe from evil threats and save the world.

Unknown 7 brothers and sisters, and many aunts, uncles, and cousins

On & Off Traitor turned Atoner

Raimundo Pedrosa is a main character of Xiaolin Showdown and Xiaolin Chronicles. He was the Xiaolin Dragon of the Wind, having originally joined the Temple from a circus in Brazil.

After three years of working with the monks in defending the world from evil, Raimundo was promoted to the rank of Shoku Warrior, resulting in him gaining full leadership of the team. He is voiced by Tom Kenny, who also voices SpongeBob SquarePants, Simon Petrikov, Fethry Duck and Eric Bauza in Xiaolin Chronicles.

Raimundo grew up in Rio de Janeiro, Brazil. His birthplace is Tubarão, a smaller town in Santa Catarina, Brazil. When Raimundo left for the Xiaolin Temple, he was leaving a rather large family behind. Though they were never shown, Raimundo mentioned his many relatives saying that he had eight brothers and sisters. Raimundo and Omi were the only monks whose family members never showed themselves.

Master Fung selected Raimundo to come train at the Xiaolin Temple and become the Dragon of the Wind. The Shen Gong Wu Raimundo used most often outside showdowns was the Sword of the Storm until he got his Wudai Weapon, the Blade of the Nebula. Along with the other warriors, he goes on a quest to find the mystical power objects known as the Shen Gong Wu.

Raimundo is generally depicted as a laid-back, resourceful character who can be mischievous at times. He is known to be a slacker; avoiding his chores by either the use of Shen Gong Wu as seen in "The Shard of Lightning" or having others such as Ping Pong or Vlad do them for him instead. Although in the end he means well, his teasing of the other monks can come off mean-spirited. Omi and Clay are usually his main targets, and in "Big as Texas" Raimundo admits that’s part of the reason he misses Clay when he returned home.

He does not take losing well; in "Shen Yi Bu", he spent the rest of the day brooding because he lost the Sword of the Storm to Tubbimura, and expressed his frustration when Jack Spicer made off with the Rio Reverso in "Oil in the Family". There are situations when Raimundo tends to action before figuring out a plan beforehand, which then leads into more trouble than needed. It’s because of this he was initially withheld from being promoted to Xiaolin Apprentice by Master Fung. However, he does own up to his mistakes and learns from them.

Though he comes off as laid-back and carefree, Raimundo has shown to have a strong sense of judgement and has bunkered down when needed. He is committed to his duties as a Xiaolin Warrior, especially more so when Hannibal Roy Bean tried swaying him to the Heylin side again in "The Return of Master Monk Guan". He has used to his street smarts to dupe opponents, tricking PandaBubba’s henchmen with fake Shen Gong Wu in "Pandatown" to rescue the other monks. Raimundo is also willing to take extreme measures (such as drinking the Lao Mang Lone Soup) if it meant saving the world.

Raimundo is shown to have several hobbies throughout the series. He is a seasoned surfer, who keeps a surfboard in his room and has daydreamed winning a surfing contest in "Shen Yi Bu". One of his favorite sports is soccer, which he frequently plays on the temple grounds and is interested in video games. After Kimiko, he the is most adept in technology, knowledgeable enough to create a computer virus. He enjoys music, particularly rap and hip-hop in "Royal Rumble" and owns a boombox as well.

Raimundo was a handsome young Brazilian teenager with a round face, dark thick eyebrows, green eyes, spiked hair. He is somewhat tall with a lean physique. He originally wore a white short-sleeved hoodie, red shoes, baggy green trousers, red wristbands and a medallion. He would later wear white long-sleeved shirt with orange and green sleeves, tan cargo pants and black-and-white trainers. Dojo also stated that he has soft hands for a boy.

Raimundo also had many weaknesses. He was constantly careless unless he seemed to feel like the world was depending on him, or if he was determined enough. He also did not like to take orders. Raimundo also had a fear of a jellyfish like monster. Raimundo eventually conquered his fear.

Raimundo had also at times allowed his temper to get the better of him. After the rest of the team was promoted to the rank of Xiaolin Apprentices, as well as having been denied this privilege since he had ignored Master Fung's orders and come back to try to help defend the temple, Raimundo defected to the Heylin side, aiding Wuya in regaining possession of her body. However, faced with the destruction of his friends and Jack Spicer, he recaptured Wuya in the puzzle box, and returned to the Xiaolin side. Although he was offered the rank of Xiaolin Apprentice, he refused, not believing himself to be ready.

Raimundo had seven brothers and sisters, and many aunts, uncles, and cousins.

Omi was another monk at the Xiaolin Temple. Raimundo had been known to make fun of Omi often and had been a bit of a bully towards him, pointing out his size at times. Despite their different personalities and bickering, Raimundo was shown to be protective of Omi. Omi is also shown to deeply care about Raimundo as well. Their closeness is shown in "My Homey Omi" when Raimundo profusely hugged Omi upon being reunited with him after the latter got separated from the former, Kimiko, Clay and Dojo, then Raimundo tells Omi not to scare them like that again and that he was worried about Omi. Their closeness is also shown when Omi is the most upset when Raimundo turns to the Heylin side and when Raimundo seemed to lead the group in trying to save Omi when Chase tricks Omi into becoming evil.

Clay was the cowboy monk at the Temple. Raimundo seems to get along with him better than he does with Omi, though he had been known to make fun of Clay too.

Kimiko was the only girl at the Temple. They seemed to get along well and were very close, though Raimundo's somewhat egocentric attitude can get on her nerves. He is protective of her. Many fans believe he has a crush on her which is revealed during the episode "Dream Stalker". 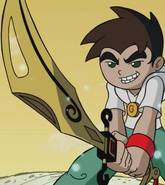