Rainbow Quartz is the Gem fusion of Rose Quartz and Pearl in the Cartoon Network series Steven Universe. She debuted in a flashback in the episode "We Need to Talk" and made a brief cameo in "Now We're Only Falling Apart".

Rainbow Quartz is quite reliable for those in dysfunctional relationships by helping to see what's ahead and releasing resentment. By fusing into Rainbow Quartz, Pearl got to release her resentment and jealousy on Greg and help him get closer to Rose thanks to his attempts at fusing with her, which lead to them taking the first step into a better relationship.

Rainbow Quartz has Pearl's agility and grace, as she is able to stand on the tips of her toes and execute acrobatics. Her weapon is a spear.

Pearl's gemstone on Rainbow Quartz, featuring a large ring around the middle. It is smooth, without facets. 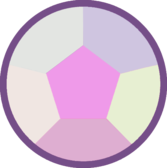 Rose Quartz's gemstone on Rainbow Quartz, featuring a pentagonal facet. It is a dodecahedron. 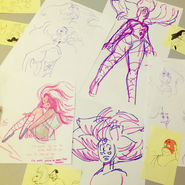