Apart from the McBain series, Wolfcastle also played Radioactive Man in an ill-fated live-action film adaptation of the comic book series. Wolfcastle has also ventured into comedic roles; in one episode, he carries Homer in an oversized Snugli for babies, remarking, "I used it to carry Rob Schneider in the movie My Baby is an Ugly Man."

Wolfcastle appears to have political ambitions, as noted by his candidacy for mayor in the recall election of Mayor Diamond Joe Quimby. He is a member of the inner circle of the Springfield Republican Party, along with Burns, Krusty the Clown, Dr. Hibbert, The Rich Texan, Count Dracula and Bob Dole. Wolfcastle has campaigned as Republican Mayoral candidate and as a supporter of Sideshow Bob for Mayor; However, he disagrees with his party on the issue of stem cell research (Schwarzenegger is noted as more socially liberal than a majority of Republican politicians on such issues).

He battles frequently with weight problems, though tries to pass it off as something he is doing for a role. His films are sometimes critical failures; Jay Sherman introduced Wolfcastle in an interview on his TV show as "star of the reprehensible McBain movies". 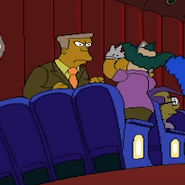 Rainier threatens to punch Krusty in the nose.