Guardian of the universe

God of the Church of the Second Hytoth
Angel

Protect the universe and the multiverse from the threat of the Voruteut (ongoing).

Rakmou-leusan, also known as the Holy Fourth, is an overarching character in the SCP Foundation mythos. They are a mysterious benevolent guardian deity who is a survivor from the previous destroyed universe and is the central figure of the Ortothan religion adhered by the Church of the Second Hytoth, and seeks to protect the entire second universe from the destruction brought by their archenemies the Voruteut.

Not much is known about the being that would become Rakmou-leusan apart that they were originally a native of the first universe, the First Hytoth, named Rakhi. One day, the Voruteut known as Aiv-Zon emerged from the chaotic reality of the Voru and began consuming the entire First Hytoth, forcing Rakhi and his friends Zeru, Ursula, Eoghan, Nessa, Yorick and Myron to lead the survivors to safety. Eventually from destruction of the First Hytoth formed a new more stable universe known as the Second Hytoth in which the survivors drilled into before settling in. The seven not wanting history to repeat itself, vowed to do everything they could to protect the Second Hytoth from the dangers threatening its existence. Zeru was able to provide them with a ritual that would allow them to ascend to godhood and gain powers which they could use to fight off the threats. The ritual was partially successful as although they were able to become gods, forming the Koru-teusa, they began to endlessly bleed. In order to keep them alive, their followers from the First Hytoth began giving their blood and formed the Ortothan religion which they began spreading all over the universe.

Rakmou-leusan, alongside the Koru-teusa, began using their god-like powers to fight the Voruteut who were trying to enter the Second Hytoth and lay waste in it, while gaining additional blood from their worshippers. However, through time the Koru-teusa would suffer major loses. During the First Invasion of the Voruteut, Zeru-leusan was slayed by the abominations, but the others were able to defeat the Voruteut and following their victory Rakmou-leusan replaced Zeru as the leader of the Koru-teusa. Uron-leusan eventually grew envious of their fellow members, especially with Eov-leusan, and so attacked Eov. Despite Rakmou-leusan's best efforts, he was unable to help them and both Uron and Eov died during the battle.

Soon both Nesren and Myran-leusan also disappeared after encouratering some beings, leaving Rakmou and Yorun-leusan as the only living members of the Koru-teusa. Unfortunately, in the Earth year of 2000, in which Rakmou-leusan failed to help Yorun during the battle, resulting in the death of Yorun-leusan whose body now rested in SCP-5471. Rakmou-leusan now the only living member of the Koru-teusa, kept on trying his best to protect the universe and fight the Voruteut and the intergalactic empire of the Twelve Stars led by the God-King of Stars who sought to destroy the Koru-teusa and their religion.

Eventually as time went on, the Ortothans failed to sustain Rakmou-leusan and they ultimately died. As a result the Voruteut were able to finally enter reality and cause destruction to the entire universe, but were stopped from destroying the Solar System by SCP-1548.

Rakmou-leusan's true appearance is unknown as it's likely that they don't actually have a real appearance, since similar to SCP-5471, every race saw them as appearing similar to them. Humans saw Rakmou-leusan as a thin humanoid with four arms, entirely covered in armor, and wearing a helmet with four eye sockets.

Not much is known about Rakmou-leusan's personality, but according to the Church's core tenets Rakmou-leusan was a skilled strategist, a kindhearted and curious being, and very optimistic and determined about their mission. 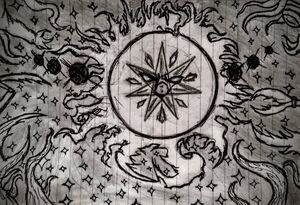