The demon (in the book)

Raise Mowgli and her cubs (succeeded).

Parent
Raksha is Mowgli's adoptive mother and a supporting character in Disney's 1967 The Jungle Book. She is also Rama's wife.

Raksha is introduced as a wolf acquaintance of Bagheera. She is a female Indian wolf, member of the Seeonee pack, who while suckling her own cubs decides also to adopt a human "cub" that her mate Rama has found wandering in the jungle, naming him "Mowgli" (which means "frog" in the Speech of the Jungle) because of his hairlessness.

Defying the tiger Shere Khan, who is determined to eat the man-cub, she reveals that her name is Raksha ("protection/nurture") because of her ferocity as a fighter, and she will fight to the death for any of her cubs, natural or adopted.

Raksha does not play a large role in the Mowgli stories, but occasionally offers her adopted son moral support.

Raksha appears at the very start of the film, and is seen at her den with her new pups. Though narration, Bagheera, states that he knew the family, and hoped that the pack would accept the newborn mancub he had discovered. Bagheera initially leaves the baby near the den, but the wolves do not notice as they have already entered the den. Bagheera intentionally startles the baby, causing him to cry. Raksha comes to investigate, and immediately accepts the baby. However, when her mate, Rama comes in, it takes some unspoken persuasion from Raksha for him to accept the mancub as well. Enamored with the baby, Rama accepts the baby, and Raksha carries the basket containing the man cub into the den.

Presumably, Raksha raised Mowgli for ten years. She is seen in a cameo, where Bagheera is describing Mowgli's popularity with the pack. However, she makes no appearances afterward.

Raksha appears in Disney's 2016 live-action adaption, voiced by Lupita Nyong'o, who also portrayed Maz Kanata in Star Wars: The Force Awakens, Patsey in 12 Years A Slave, and Nakia in the Marvel Cinematic Universe. 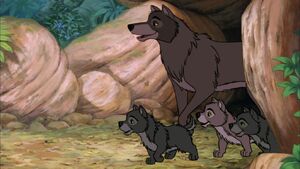 Raksha and her pups 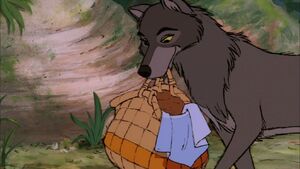