This page is about the incarnation of Raksha from the 2016 movie. The mainstream version can be found here: Raksha (Disney).

Being with her family
Taking care of Mowgli

Raksha is Mowgli's adoptive wolf mother and a supporting character in the 2016 live action film adaptation of Disney's The Jungle Book.

She is voiced by Lupita Nyong'o, who also played Patsey in 12 Years A Slave, Nakia in Black Panther, and Maz Kanata in the Star Wars sequel trilogy.

Raksha serves as Mowgli's adoptive mother after Akela approves of his joining the Seeonee pack as an infant thanks to their old friend Bagheera, the panther, and is highly supportive and protective of him. When Shere Khan threatens him during the pack's drinking at the Water Truce, the watering hole where all the animals come to drink in peace during the drought, Raksha stands firm in her defense of him, defying Shere Khan's demands to have the boy handed over to him and citing the tiger's propensity to kill for sport and pleasure when he says man is forbidden in the jungle according to their laws. When Mowgli leaves for the Man-village with Bagheera in order to protect her and the rest of the pack from Shere Khan's wrath, Raksha does not want him to leave, and only agrees with Akela and Bagheera in the hope that he'll be safe. Just before Mowgli leaves, Raksha reminds him however that he will always be her son, no matter where he goes or what he is called.

When Shere Khan returns, Raksha is the first to notice, and witnesses the tiger murdering Akela. Raksha also is witness to Shere Khan lecturing the wolf pups after he takes over the pack, and in his lessons he mentions the cuckoo, citing the bird's proclivity for placing its hatchlings in the nests of other birds. He directs this lesson to the pups intentionally at Raksha for her previous defiance at the Water Truce, for raising the man-cub as her child, and subtly threatens the wolf pups as an additional punishment. When she asks why Shere Khan is doing this, he answers that he wants Mowgli dead (due to the wounds Mowgli's father inflicted on the tiger with a burning torch), and that he'll be waiting when the boy returns.

When Mowgli returns and faces Shere Khan at the Water Truce with a burning torch stolen from the Man-village with the intent of avenging Akela ahead of a wildfire he inadvertently causes, Raksha and the rest of the pack along with the other animals gathered there, initially react with fear to his power over fire. However, when Mowgli throws the torch away to face Shere Khan on even terms, she is the first to defy Shere Khan. Raksha and her pack, along with Bagheera and Baloo the bear, face down Shere Khan, who replies that if they wish to defend Mowgli, then he will have them all in his teeth. Raksha rallies the wolves to attack the tiger after Shere Khan battles and bests Baloo in combat, and the Seeonee pack inflict some damage to him, though he beats them off and continues his pursuit of Mowgli. When Bagheera is about to be killed by Shere Khan during the fight, Raksha and her wolves rush to his rescue, again inflicting damage and holding off the tiger before he beats them and chases after Mowgli. Their actions delay Shere Khan long enough for Mowgli to set a trap and kill Shere Khan. After the fire is put out by Mowgli and the elephants that come to his aid, Mowgli is recognized as a fellow creature of the jungle by Raksha and the rest of the animals gathered. In the aftermath of the events, Raksha has become the new leader of the Seeonee pack and has accepted Mowgli as part of the pack once again. 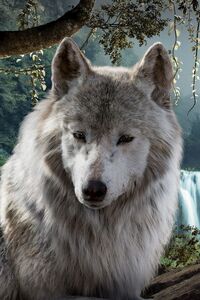 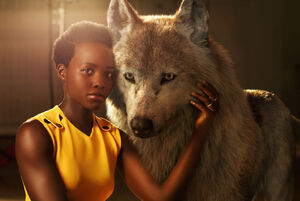 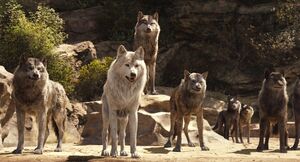 Raksha stands up to Shere Khan. 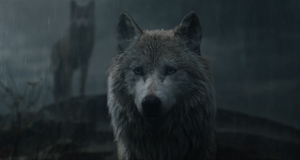 Raksha in the 2016 film The Jungle Book 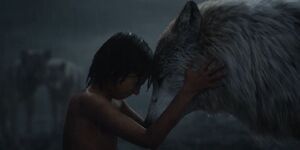 Raksha and her adoptive son, Mowgli 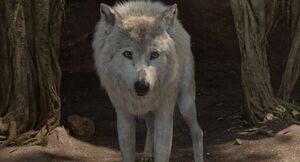 Raksha after witnessing the murder of Akela. 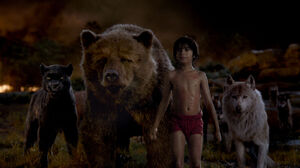 Raksha with Mowgli, Bagheera and Baloo, standing up against Shere Khan 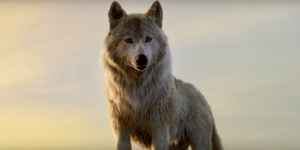 Raksha as the new leader of the Wolf Pack