Varies depending on episode

As a result of his mother marrying Cleveland, Rallo has gained Cleveland Brown Jr. as a step-brother. His best friends are Julius and Walt.

Despite his age, and the fact his father has been absent for most of his life, Rallo behaves much like Robert, behaving at times like a very articulate thug, and hormonally charged. He seems to get along fairly well with his mother Donna and has a normal love/hate relationship with Roberta, who at times seems to neglect him, yet at other times speaks to him as if an intellectual equal.

Rallo is a child of somewhat short height, He sports a poofy afro in which he takes great pride in showing it off and dreads the idea of getting it shaven as seen in "Of Lice And Men". He wears a turquoise shirt, blue shorts with white and red shoes. As seen in the mentioned episode under his afro he sports an oddly shaped head which becomes the butt of most jokes.

Despite the fact that his father is hardly ever around and his young age he acts just like Robert, Taking after his charisma, slang and is even hormonally charged with a thing for the ladies. Due to him being able to understand adult situations and being mostly mature he has been comparable to Stewie Griffin, with Freight Train even calling him "Black Stewie". He can revert back to being his normal 5 year old self if the situation calls for it or depending on the plot. In "American Prankster" It is revealed that he is a master prankster and has enjoyment in causing mischief however his inner-child causes him to be scared and flee when he is caught and pranked himself by Cleveland, He is also very fond of pets namely dogs as when Cleveland accidentally killed his dog Meadowlark Lemon in "Da Doggone Daddy-Daughter Dinner Dance" he and Cleveland go on a desperate search for him with Cleveland looking in nasty places and Rallo was devastated when the truth came out. Also in "Hustle 'N' Bros" Rallo and Cleveland Jr. become dog bounty hunters and after finding Mr. Waterman's poodle Rock Hudson Rallo becomes attached to him. Rallo is also known to address almost anyone in an aggressive and insulting demeanor but dosen't usually have malice intended. In general, Rallo is a good person at heart, but can be very disrespectful to his father.

He likes kickball, super sugar crisps and looking at naked celebrities on the internet. He is also quite good at speed stacking, able to stack cups into three complex structures in under nine seconds.

He has a thing for the ladies and with Cleveland's help in the "Pilot", has discovered a less obvious way to check out the girls in his kindergarten class at Harper Elementary School.

Rallo has had at least one relationship, with Candice West in "Brotherly Love" and in "Harder, Better, Faster, Browner". His 'smooth' moves caught Candice's eye almost instantly, but soon Candice took charge in the relationship, something Rallo didn't take to very well. He simply ditched her one night at a restaurant while she was in the bathroom along with several other men who decided they would much rather play skee-ball at Cheese E. Charlie's. 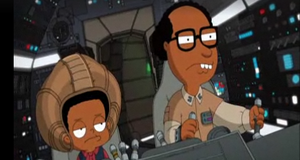 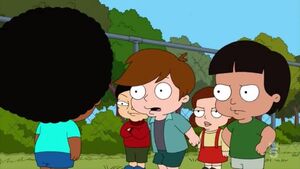 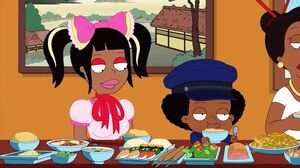