Ralph Alessandro Giuseppe"Ralphie" Tennelli is the class athlete and daydreamer. He plays a lot of sports, and when he's not, he's daydreaming about playing sports. He's of Italian American descent, once mentioning that his mother's calzones "go down like rocks.", and his entire family owns an artisan Italian restaurant. He has a distaste for anchovies, which his dad puts on pizza to keep him from eating it. He mentions in "Kicks Up a Storm" that he hates roller coasters and shows to have a weak stomach in "For Lunch". Despite his occasional machismo, he has no problem showing when he's afraid. He loves superheroes and reads comics (Kicks Up a Storm, The Battle for Rock Mountain), and he appears to be a science-fiction fan (as shown by his pajamas). In "The Frizz Connection", when the Bus and Ms. Frizzle are split into three parts, he appears with Carlos and Keesha on a part of the Bus conducted by Ms. Frizzle's humorous side.

Ralphie was born to Dr. Tennelli and Mr. Tennelli. His mother is a medical doctor, and his father works at an Italian restaurant. His cousins and aunt are the Flying Tennellis, a trio of trapeze artists.

Ralphie loves sports and daydreaming. He's outgoing, kind, imaginative, and fun loving, and on rare occasions, he can be cowardly. He enjoys a day off from school, but he does respect his teacher and enjoys being in her class.

Ralphie is upset he hasn't come up with an idea for Broadcast Day as he types on his computer, and he's even more upset when his mother tells him he's staying home due to being sick ("Inside Ralphie"). The class comes to him, and their Broadcast Day becomes about his sick body. Irritated when Dorothy Ann interrupts the class baseball game to talk about her physics book, In this episode. Ralphie's uncle who dry the desert, in ("All Dried Up"). In this episode. Ralphie's younger brother who seen in ("Gets Ready, Set, Dough"). In this episode, he sees it would make the perfect home plate to his father. ("Plays Ball"). They continue to butt heads when Ms. Frizzle takes the class inside the book to play a frictionless baseball game, but they stop their fighting long enough to get the bus unstuck when the wind blows the book shut. In this episode, His younger brother, who goes to the Phoebe's Old School, in ("Goes to Seed"). Also in this episode. His younger brother again. Who goes underground in ("Gets Ants in Its Pants"). He comes up with a superhero persona in "Kicks Up a Storm" named "Weatherman." He and Keesha argue over who knows how storms are made and using the bus, he eventually makes one, realizing he may have made a huge mistake.

Tired of having to do class chores, which keep him from playing sports, Ralphie decides he wants to build a robot to do all the chores for everyone "Flexes Its Muscles". When the bus acts up, he gets his chance when Ms. Frizzle takes the class to her mechanic. In this episode. Ralphie, his aunt and his friends are visit Dr. Carmina Skeledon, in ("The Busasaurus"). In "Going Batty," he is convinced she is a vampire due to many coincidences, and he fears she plans to eat their parents during the parent-teacher conference for his mother, which is taking place not only off-campus but also at night. His mother drop them off to the Walkerville Elementary School. So his father tells him that his stepbrother and his uncle is gonna be there. Meanwhile. Six hours before the "biggest soccer game of the year," he is aggravated when Phoebe wants to name the team the Butterflies ("Butterfly and the Bog Beast"). Also in this episode. His stepbrother again. His class goes up to the sky, in ("Wet All Over"). He's the last in the class to finally agree to the mascot, though at one point he said he'd rather play for the other team. In Cold Feet, Ralphie is transformed into a turtle when he and his stepbrother, Miss Frizzle and some of his classmates help Phoebe rescue Liz. In this episode. Ralphie's grandfather. Who goes in the ocean, in ("Ups and Downs").

On a class trip to the Arctic, Ralphie is trapped on an ice floe with Robbie and Liz, Phoebe, and the bus, and he worries that he'll never hear another bad joke from Carlos and never go on another field trip ("In the Arctic"). In this episode. Ralphie, his aunt and his friends are watching the movie, in ("Spins a Web"). In this episode. His uncles, Brian, Ed and Frankie are drop him off to Walkerville Theater, in ("Gets a Bright Idea'). In this episode. His stepbrother are making the Rainbow, in ("Makes a Rainbow"). In "Goes Upstream," he's in charge of bringing fish to the school's annual Fish Fry. Unable to catch any salmon at the spot he and his uncle used to fish, the class finds out that the salmon have migrated. Up until realizing what a hard journey it is, he is determined to bring back some fish to the school. He's Ms. Frizzle's trainer for the Teacherathlon in "Works Out." Seeing that her competitor is the heavily muscled gym teacher, Mr. Sinew, he wonders how she'll ever beat him and his father. In this episode. His stepbrother are power the Phoebe's Planted, in ("Gets Planted"). In this episode. His mother are having a ceremony, in ("Rocks and Rolls"). In this episode. His uncle are having a Holiday, in ("Holiday Special").

In this episode. Ralphie, his friends, his teacher and his younger brother are having a Arnold's 11th Birthday Party, in ("The Frizz Connection).

Ralphie is a Caucasian boy with brown hair and blue eyes. 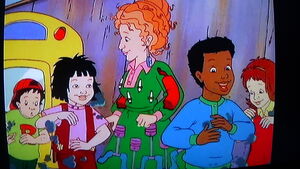 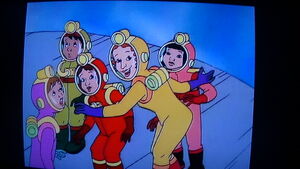 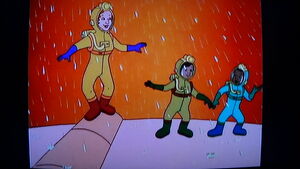 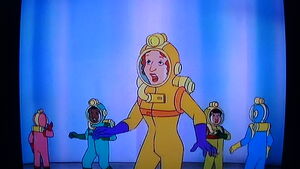 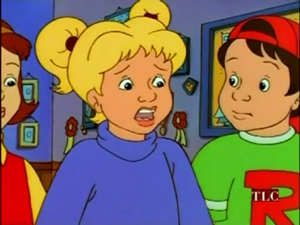 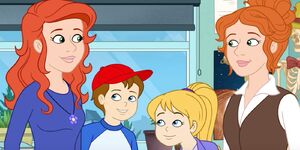 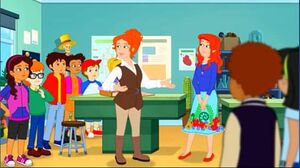 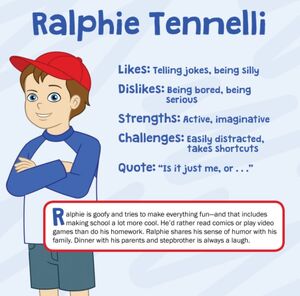 His house was seems in Inside Ralphie, Butterfly and the Bog Beast, Gains Weight and Space Mission: Selfie.