Help the Kong Family in their adventures

Heroic Animal
Rambi the Rhinoceros is a long-time recurring Animal Buddy from the Donkey Kong series.

Rambi makes his debut in the first level of Donkey Kong Country "Jungle Hijinx". He can use his large horn to attack enemies and break weak walls. He can also jump on Zingers unharmed. Rambi reprises these roles in Game Boy mini-sequel Donkey Kong Land.

Rambi appears as a trophy and a sticker that give a boost on hand attacks power by 13 to any fighter.

Rambi appears as a trophy.

Rambi appears as a ace primary attack spirit that increases the user's speed. His spirit battle is on the omega form of the Kongo Falls stage against Donkey Kong who can deal damage by dashing into the player. 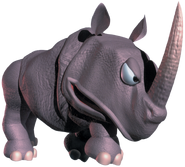 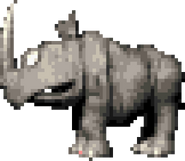