Ramlethal Valentine was a boss character and now one of the main protagonists, along with Sol Badguy and Sin Kiske of the Guilty Gear franchise. She is a resident of the Backyard who appear in Guilty Gear Xrd -SIGN-.​

She is voiced by Megumi Han in Japanese and Erin Fitzgerald in English.

The life forms collectively known as Valentine, which are birthed in the Backyard, are devoid of emotions. They have no values of their own, no concept of right or wrong and neither like or dislike anything.

It is because of this that they view the orders from the one called "Mother" as absolute commands that are not to be questioned.There is no thought or affection, nor any feelings of doubt or restraint - only a machine-like obedience of carrying out a mission. The Valentines view themselves as merely to be used to achieve a goal.

However, in the creature known as Ramlethal, one can detect signs of faint but undeniable emotions. Valentines, in general, are unable to place any kind of value on anything other than their assigned target. Without any thoughts, feelings or desires of their own, these creatures do not possess the capacity for falsehood, making them naive in their honesty. However, Ramlethal is able to withhold information as well as play dumb in order to bluff her way through certain situations.

Though she is not aware of it, she has personality all her own. In Story mode, Ramlethal starts to open up thanks to Sin and Elphelt, developing emotions and fondness for a magehound.

Following her encounter with Bedman, Ramlethal no longer refers herself as a tool of "Mother" but as "unique".

A lone girl who declared war on the entire world. She is a non-human life form born in the Backyard, which governs all of creation. She is the successor to the Valentine who orchestrated the prior Baptism 13 Incident (the Illyrian Invasion). As an assassin of the Merciless Apocalypse, her objective is the extermination of the human race, and to that end she has formed an alliance of convenience with the United Nations Senate. Waking of the “Cradle” is her sole objective and mission.

Ramlethal Valentine appeared on October 21, 2187 at 12:12 in Japan and declared war on the world, threatening to kill anyone she deemed "unworthy".

After being taken into custody by Illyria (caused by her sister's interference), she is interrogated briefly by Sol and Ky. Sin Kiske, however, simply tries to get her to open up by having her develop emotions and free thought. Over time, he makes some progress as Ramlethal shows slight signs of emotion. These growing emotions are also fed by her sister, Elphelt]], who wishes for Ram to help Ky and the others.

When Bedman is sent by "Mother" to eliminate Ramlethal, he agrees to do so as he sees her as a thing, not a person. He is quite shocked, however, to see she has gained emotions and thus can't bring himself to kill a "little girl."

In the Final Chapter of Story Mode, her emotions and convictions are seen to have developed further as she stops her sister from self-destructing and returns Elphelt to her non-programmed state of mind. She is last seen in the company of Sol,Ky, and Sin as she watches her sister being summoned back into the Backyard.

Ramlethal Valentine uses balloon-styled familiars named Lucifero as a weapon, like the previous Valentine. However, unlike the latter, Ramlethal uses two, one black and another white, which can combine with each other. She carries two Greatswords which she can summon and telekinetically control. She can also alter their size and increase their destructive capabilities by charging them with energy. Her cloak is organic and changes its shape to whatever she chooses so it can be used as a weapon during battle. She can generate claws made of energy, bind her enemies within a magic field, fire various energy bursts and projectiles, and materialize a green barrier to protect herself. She is also incredibly fast, capable of closing the distance between herself and an opponent instantaneously. Ramlethal also possesses a self-destruct mechanism.

As a soul candidate for Justice as well as a Copy of her, she is exceptionally powerful, as it has been stated by various characters, including Dizzy]],Ky and Sol. Haekyun's Tuning analysis states that of her Ki structure is like a "Wind Instrument", meaning that she has a vast amount of mana without a filter to regulate it. Uncovering her hidden emotions and gaining a drive beyond her Mother's orders has made her even stronger, as implied in -REVELATOR-. 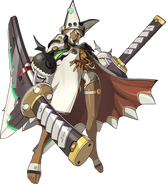 Guilty Gear Xrd
Add a photo to this gallery 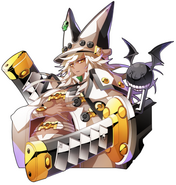 Fantasy War Tatics
Add a photo to this gallery 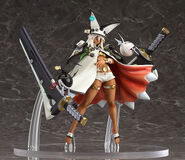 Retrieved from "https://hero.fandom.com/wiki/Ramlethal_Valentine?oldid=1694762"
Community content is available under CC-BY-SA unless otherwise noted.