Ranger Margaret is one of the two forest rangers, the other being Ranger Frank, and one of the supporting characters in The Rugrats Movie.

She is voiced by Whoopi Goldberg.

A running gag in the movie is Frank giving Margaret some helpful advice, before promptly acting like the opposite of the advice he just told her.

While driving their Jeep down the road, Frank talks to Margaret about the dangers of the forest. Just then, the Reptar Wagon flies out of the bushes behind their Jeep and Margaret gets a glimpse out of it, mistaking it for a "dragon'. When they get back to their station, Frank dismisses Margaret's notion until he sees the Reptar Wagon floating down the river in his telescope and starts shrieking hysterically. Later, during the storm, the parents came to the Ranger station to convince them to help find their kids. Frank was too busy deliriously ranting about the "dragon" he saw to be of any use. Margaret however was more of use and led the adults out the door to help them search for the kids, leaving Frank alone sobbing hysterically.

When the parents reunite with the Rugrats and start to go home, Margaret is last seen pulling the Reptar Wagon home. 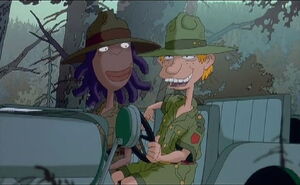 Margaret and Frank driving down the road.
Add a photo to this gallery

Retrieved from "https://hero.fandom.com/wiki/Ranger_Margaret?oldid=1679525"
Community content is available under CC-BY-SA unless otherwise noted.