Find his identity
Save Dirt (all succeeded)

Rango is the titular main protagonist of the 2011 Nickelodeon animated film of the same name. He is a quirky and dimwitted chameleon who, after being stranded in the desert town of Dirt, goes on a journey of self-discovery as he looks out for his new home.

He is voiced by Johnny Depp, who also portrayed Captain Jack Sparrow in the Pirates of the Caribbean franchise, Willy Wonka in Charlie and the Chocolate Factory, the Mad Hatter in the live-action Alice in Wonderland films, Tonto in The Lone Ranger film, Edward Scissorhands from Edward Scissorhands, and Ichabod Crane in Sleepy Hollow.

Rango is a very comical character but also lonely as he remains isolated in his box and is actually seen conversing with inanimate objects such as a headless mannequin, a dead cockroach, a toy fish and a decorative tree. However, he actually believes he has friends and a very active social life only to be corrected by Roadkill claiming him to be a very lonely lizard.

Throughout the film Rango was seen suffering from an identity crisis; He is constantly seen saying "Who am I?" to himself and doesn't even know his own name, causing him to create his own identity. Rango is an actor and expects his "friends" to be the same; He describes Victor, an inanimate tree as wooden and his toy pet fish Mister Tibbs, good - too good. After arriving at the town of Dirt, Rango was able to create his own identity and name, he also had a tendency to go over-the-top as he said where he came from they kill and cannibalise a man before breakfast just to wake up an appetite.

Rango was also cowardly, as was shown during the desert when he caught the eye of a hawk and than ran away screaming in terror. This also happened again during a showdown with Bad Bill and his crew, when the hawk returned which caused Rango to cower in a latrine and then flee. He was also in clear terror when Rattlesnake Jake entered Dirt, however so was everyone else.

Despite his stories claiming that he was the one who killed the seven Jenkins brothers, Rango had never and was always reluctant to actually kill someone; This was shown when a hawk was close to eating him and Rango held him at gunpoint but then hesitated and shot the rope that was restraining him, which accidentally caused him to be crushed and made the town believe that Rango was the one who murdered him. This was also shown when Rattlesnake Jake offered Rango the chance to kill him and even Jake saw he had no killer in his eyes, however this changed when he returned to confront the Mayor and Jake and was willing to shoot the rattlesnake at point blank range. During the film Rango became courageous.

After the Mayor made Rango the Sheriff of Dirt, he was shown to be very clueless, almost shooting a child in the face when he only wanted an autograph and then handing him a gun. He also came across three bank robbers and mistakes them for miners, then actually gives them a prospecting permit and gives them directions to the Bank of Dirt.

Despite this, Rango is intuitive and intelligent, as is shown when him and his posse captured Balthazar and his family and he was able to realize that something ominous was happening in Dirt and believed that they found the empty jug of water and didn't murder anybody, and when the Spanish Daggers were seen walking like the legends told they do towards water and he discovered Las Vegas where he realized that the Mayor's true plan was to buy up all the land and then bring back the water when Dirt was washed away.

After being humiliated by Rattlesnake Jake, Rango shamefully leaves Dirt but after a pep talk from the Spirit of the West and uncovering Mayor Tortoise John's true plan, he returned to Dirt and showed true bravery and made an alliance with Balthazar's family, then confronted Jake who he was able to outsmart and then return the water to Dirt, becoming a legend of the people.

Afterwards, the town of Dirt became the town of Mud and had a water park built in it. After hearing rumors of Bad Bill acting up outside of town, Rango goes to to investigate.

According to the song, Rango becomes a successful lawman who kills criminals and woos ladies until Bad Bill returns to town seeking revenge. The next part of the song states that Rango died, "with a six-gun at his side", though it is unknown what exactly killed him. 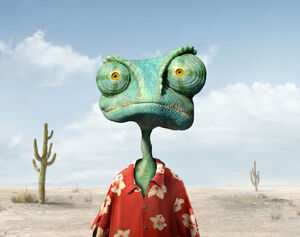 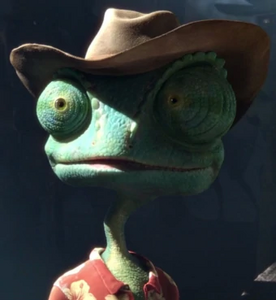 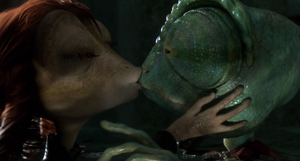 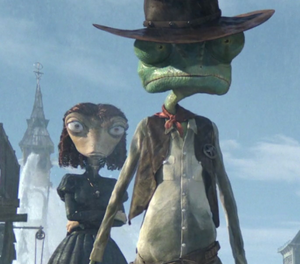