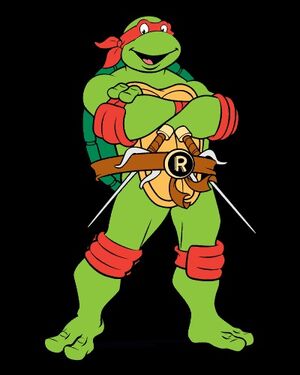 Raphael is one of the main characters of Teenage Mutant Ninja Turtles. He is the brother of Donatello, Leonardo, Michelangelo and adoptive son of Splinter.

He was voiced by Rob Paulsen.

His personality in the 1987 animated series deviates the most from all other incarnations, though the show's theme song states that Raphael is "cool, but crude" (he takes a slice of pizza with his sai and shoves the rest of it onto the screen). Despite the theme's reference to his crudeness, he had a more toned-down attitude in this incarnation opposed to all other incarnations, as this series was based primarily on humor. Raphael is a sarcastic wise-guy, and supplies comic relief alongside Michelangelo, whose humor is usually attributed to his ignorance and spaciness, whereas Raphael is more sarcastic and witty. As a result, Michelangelo is the subject of Raphael's jokes more than any other Turtle. He frequently makes jokes that break the fourth wall.

He has a far less confrontational relationship with his friends and fellow Turtles — the most striking example being his lack of a sibling rivalry with Leonardo. Raphael has no desire to steal anyone's thunder or become a leader; he's perfectly content providing the wittiest of the cartoon's jokes, being the most humorous turtle of the group. Despite this, Raphael usually served as a contrast to Leonardo's "gung-ho do-gooder" persona with his pessimistic sarcastic remarks. However, Raphael did challenge Leonardo's leadership once in the season 8 episode "Turtle Trek".

In the Season 4 episode "Raphael Meets His Match", Raphael was paired off with a mysterious mutant female named Mona Lisa, who might have been considered as a potential girlfriend for Raphael. Despite following the Turtles back to New York City, Mona Lisa was never seen again.

In the season 5 episode "Raphael Versus the Volcano", due to a malfunction in Donatello's Healthometer, Raphael was convinced that he soon was going to die and decided to end his life as a hero named the "Green Defender", saving people from dangers and stopping criminals when he thought he had nothing to lose. When the Healthometer malfunction was discovered, the other Turtles tracked him down to tell him he wasn't going to die.

Raphael also made a couple of appearances in the 2012 series in the episode, The Manhattan Project. He and the other turtles along with Casey and April are seen through a portal by their 2012 counterparts walking on a road and he made a speaking cameo along with the other turtles at the end of the episode when a space worm from the 2012 dimension started terrorizing the street. All four turtles see the worm and spring into action while shouting their famous catchphrase, 'Cowabunga'.