No information
Raphael is one of the main characters of Rise of the Teenage Mutant Ninja Turtles. He is the oldest brother of Leonardo, Donatello, Michelangelo.

He is voiced by Omar Benson Miller.

Raph is a mutated snapping turtle. He is more big and bulky compared to his previous incarnations. Inatead of wearing a regular bandana, Raph wears a "over-the-head" bandana. The bandana has always been red.

He is also considerably less angry and serious than previous incarnations, though still eager to get into fights.

He often acts before he thinks which often gets the other turtles in trouble.

He is now the leader and his enthusiasm and bravado puts him front and center for most of their bizarre adventures." 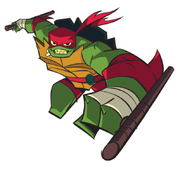