Bring her village back to its former glory (succeeded).
Make Naofumi the greatest hero of all time (ongoing).

Raphtalia, also known as the Katana Hero, is the deuteragonist of The Rising of the Shield Hero light novel series, as well as its anime and manga adaptions. Raphtalia was a demi-human slave girl purchased by Naofumi Iwatani, the Shield Hero.

She became the first member of Naofumi's party, eventually falling in love with him due to his kindness and benevolence as a master. After some time serving in the Shield Hero's party, Raphtalia became the Katana Hero, wielder of the Vassal Katana.

As a tanuki-like demi-human, Raphtalia has several tanuki-like features that distinguish her from regular humans. Instead of human ears, Raphtalia has a pair of tanuki ears on the top of her head that occasionally twitch when experiencing some kind of sensory stimulation. She also has a fluffy tanuki tail protruding out of her backside, which often makes motions based on Raphtalia's emotional state, such as when her tail stands on its own, which conveys anger. She has tea-red eyes and has been described as incredibly beautiful for a demi-human. Raphtalia has a purple slave mark imprinted on her chest.

In her initial appearance as a slave girl, Raphtalia had long, dirty, unkempt hair that flowed down to her hips. In keeping with her destitute appearance, Raphtalia only wore torn rags and chain buckles around her neck and wrists.

After being purchased by Naofumi, Raphtalia was cleaned up and given a fresh set of clothing. Raphtalia's new outfit consisted of fur boots and a brown and red dress that went down to her knees. She still wore the chain buckles, perhaps to mark her as a slave. With her cleaned up appearance, Raphtalia was often given preferential treatment due to her cuteness.

Raphtalia originally lived in a small coastal village outside of Melromarc.

Her parents were good people who told Raphtalia to always smile so that others could find hope and happiness. Growing up, Raphtalia was told tales about the legendary Shield Hero, who was considered a hero by all demi-humans.

Before the villagers could rebuild, a group of vile Melromarc Knights came to the village and ravaged the settlement. The adults were slaughtered during the raid, while the children were captured for slavery. Raphtalia and Rifina were separated from Keel during the ordeal.

She and Rifina were purchased by Idol Rabier, who pleasured himself by torturing innocent demi-humans children. Raphtalia was tortured ruthlessly, which lead to a mental breakdown and severe trauma. After some time in the vile noble's possession, she was sold to several different people before ending up in the hands of a slave-dealer named Beloukas in Melromarc.

One day, at the age of 10 years old, Raphtalia was purchased by a man named Naofumi Iwatani for thirty silver coins. She was given a slave crest on her chest, meaning she couldn't disobey any of Naofumi's orders or lie to him. Naofumi took Raphtalia to Erhard's blacksmith shop, where he brought her a new outfit and a knife. Iwatani took an orange balloon monster out of his cape and ordered Raphtalia to kill the creature. Although she originally refused to harm the balloon monster, Raphtalia's slave crest forced her to comply. After managing to kill the creature, Raphtalia was told by Naofumi that he needed her to kill monsters for him as he had no means of the offense himself.

Naofumi then led Raphtalia to an inn where he brought her a meal due to her grumbling stomach. Raphtalia was extremely grateful to her master as she hadn't had a fulfilling meal since her capture.

Training with her Master

After lunch, Raphtalia was brought into the wilderness to hone her skills against low-level monsters. While taking a break, she asked her master about himself. Naofumi revealed that he was the current Shield Hero, a fact that awed the young slave. The Shield Hero then gave medicine to Raphtalia, who had been suffering from cough since her imprisonment.

That night Raphtalia had a nightmare about the death of her parents and woke up screaming, prompting Naofumi to comfort the child. Over the next week, Raphtalia continued training with her master, forging a close relationship with him due to his kindness. Raphtalia declared after killing her first animal that she would become Naofumi's sword and fight the waves of calamity that took her parents.

Light & Dark Magic: Tanuki-like demis are well known for their natural skill at casting illusion magic, Raphtalia being no exception to this, as she has a natural affinity for light & dark magic, which allows her to cast illusions.

Swordsmanship: As Naofumi Iwatani's sword, Raphtalia is naturally a master swordswoman, having trained with the Shield Hero for some time. She is able to create the illusion of a blade by channeling her magic through an enchanted hilt, which causes mental damage rather than physical. 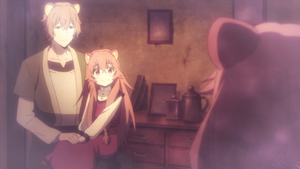 Raphtalia with her parents. 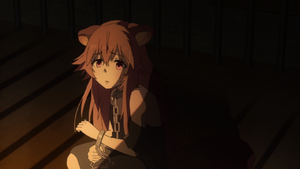 Raphtalia as a slave. 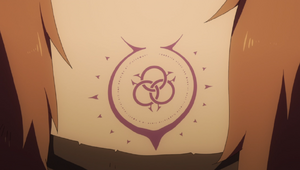 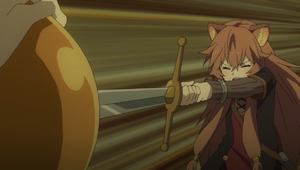 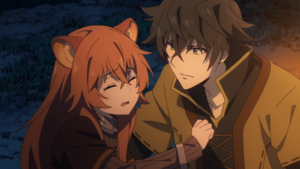 Raphtalia is comforted by Naofumi after a nightmare. 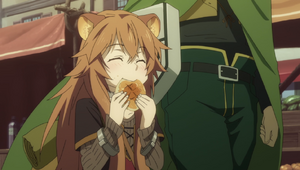 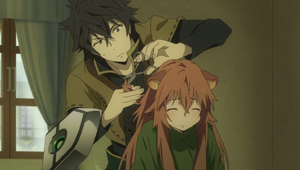 Raphtalia gets a haircut. 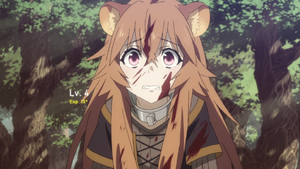 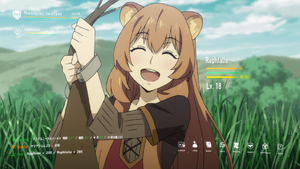 Raphtalia as a teenager. 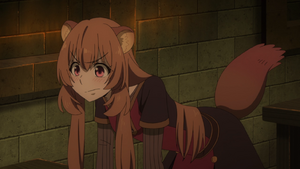 Raphtalia angry with Naofumi for treating her like a child. 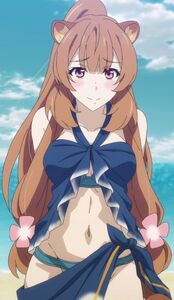 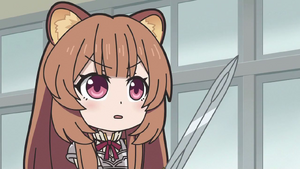 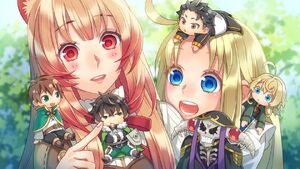 Raphtalia, Naofumi and Filo in the Isekai Quartet Episode 14 End Card.
Add a photo to this gallery

Retrieved from "https://hero.fandom.com/wiki/Raphtalia?oldid=2003632"
Community content is available under CC-BY-SA unless otherwise noted.