Raquel is a dog-like fairy mascot, one of the four main mascots in Doki Doki! Pretty Cure. She is very reliable, much like his partner, Cure Diamond. He ends her sentences with "~quel!".

He is voiced by Yuka Terasaki in the Japanese version, and by Stephanie Sheh in the English version.

Raquel has blue fur in different shades, and two droopy dog-like ears. There are deep blue diamond markings on the tips of his ears. His eyes are deep blue, with eyelash-like markings which are seen to be more curly at the top of the markings. His tail is round and bushy. He wears a ribbon collar with 2 ribbon tails on the front. He also wears a large blue ribbon on his head, decorated with stripes and a silver heart medallion.

Raquel has the rare ability to fly, turn into a Commune and help a Rikka transform into Cure Diamond. 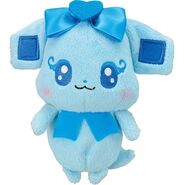