Heroes Wiki
Register
Don't have an account?
Sign In
Advertisement
in: Female, Cartoon Heroes, My Little Pony Heroes,
and 3 more

Rarity is main character of My Little Pony: The Runaway Rainbow. She is a young unicorn, chosen to be one of the Rainbow Princesses.

She is voiced by Cathy Weseluck, who also voices Shampoo from Ranma ½, Snoozer from Hamtaro, and Buttercream Sundae from Littlest Pet Shop, Dennis Chan from Kid vs Kat and Spike from My Little Pony: Friendship is Magic.

She is pink unicorn with yellow, orange, pink, blue, purple and green mane. She has blue eyes and her cutie mark is Heart with a rainbow swirl.

She likes to have fun and play games. Rarity is very cheerful, energetic, full of mischief and sometimes values fun than her duties. She also can feel sad and lonely after she misses her hometown and wanting to come back. As one of the Rainbow Princesses alongside Brights Brightly, Cheerilee and Whistle Wishes, she was in charge on bringing in the first rainbow of the season and also using the Magic Wand.

My Little Pony: The Runaway Rainbow

Cheerilee is teaching a young unicorn pony named Rarity about being a Rainbow Princess and her duties to make the First Rainbow of the Season using the magic wand. Rarity is still young and she accidentally uses the wand, which in turn teleports her into the middle of Breezie Blossom.

Rarity befriends the Breezies and they visit Ponyville and later Rarity feels homesick. Pinkie Pie, Minty, Rainbow Dash, Spike and the Breezies help her get home, just in time for the first rainbow of the season. 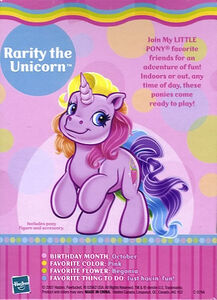 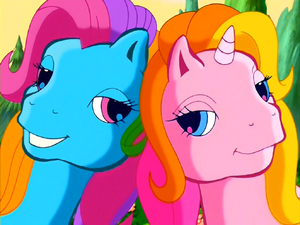 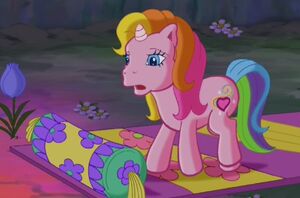