Medical officer of the Autobots.

Protecting the Earth from the Decepticons
Fixing and repairing the Autobots' wounds.

Save the Earth from the Decepticons. (Succeeded)
Prevent the humans from capturing or killing Optimus Prime (Succeeded for a while) and survive. (Failed) (Fourth Film)

Arriving on Earth at the same time as Optimus Prime, Jazz and Ironhide, Ratchet's protoform crash-lands outside a local diner. Ratchet quickly scans a yellow emergency Hummer H2 and reconfigures his protoform to a new camouflaged form before meeting up with the other Autobots at Bumblebee's location. In the Autobots introductions, Ratchet unintentionally embarrasses Sam in front of Mikaela, as he does not fully understand human social rules yet, commenting "The boy's pheromone levels suggest he wants to mate with the female. Other way around, not so much" by using his enhanced senses. The Autobots then return to Sam's house and retrieve his great-grandfather, Captain Archibald Witwicky's glasses (that have the location to the Cybertronian life-giving cube, "Allspark") whilst attempting to hide from Sam's parents, which results in his mother's and father's prized gardens being destroyed by Prime's massive feet. Ratchet also accidentally gets entangled in power lines, sending him spasming to the ground and causing a blackout in the neighborhood. Sam finds the glasses, but before he can hand them over to the Autobots, agents of a secret government organization called Sector 7, suddenly arrive at his home and arrest Sam and Mikaela, and later capture Bumblebee.

Ratchet also appears to be a very wise Autobot in the film. After Bumblebee's capture, when the Autobots are discussing about the location of the Allspark and their war with the Decepticons for acquiring it first, Optimus states that he intends to unite the Cube with his spark. Ratchet warns him that the Cube's raw power would destroy them both. Moreover, he also tells the Autobots - "I sense the Decepticons are getting ready to mobilize". Ratchet plays a large role in the final battle, where he, Jazz and Ironhide first battle Brawl. Later, he and Ironhide provide cover for Sam against Blackout and Brawl as the latter tries to escape with the Allspark and also engage in a battle with Starscream, who disables both of the Autobots, causing Sam to reach his destination building alone. Ratchet's injuries at the hands of Starscream keep him from getting to Jazz in time before the small Autobot is torn in half by Megatron. Ratchet survives the battle and is seen along with Ironhide, Bumblebee, and Optimus Prime watching the sunset in the end of the film. In Jazz's bio, it states Ratchet revived Jazz with a fragment of the AllSpark.

Ratchet appears in the sequel however he was less seen in the film. Ratchet first appears for a brief moment when the Autobots got back to the NEST headquarters in Diego Garcia. He arrives with the other Autobot reinforcements after Optimus's death. He works with NEST and is seen with the other Autobots when they are placed under arrest. He is then seen in the battle at Egypt fighting with the soldiers against Decepticons and with the help of Jolt, he repairs Optimus with Jetfire's body.

Ratchet has a larger role in Transformers: Dark of the Moon. He first is seen accompanying Optimus Prime when they arrive in Chernobyl. He is present in the meeting at the NEST base when Optimus decides to go to the moon. Optimus and Ratchet wind up on the moon and retrieve Sentinel Prime body and his pillars from the Ark and bring it back to Earth. He is present when Optimus revives Sentinel with the Matrix of Leadership. He is also seen leaving with the rest of the Autobots on the Xantium and is present when Optimus and the rest of the Autobots return. Ratchet provides cover fire for the humans alongside Mirage, Sideswipe, and Bumblebee during the final battle. He also battles Sentinel Prime alongside Optimus Prime, Bumblebee and Sideswipe and is at one point seen shooting down a Decepticon that is on top of a building. When Sam calls for help after he kills Dylan Gould, Ratchet responds and shoots the Control Pillar several times before Bumblebee crashes through it, destroying it. Ratchet is one of the surviving Autobots at the end of the movie, complimenting Bumblebee’s bravery in battle.

Cemetery Wind along with Lockdown hunted down Ratchet and killed him before he got a chance to escape. He was eventually avenged when Optimus Prime killed Harold Attinger and Lockdown.

Ratchet has also gone through some changes; he has been painted green and white, and stands at a shorter height of 19 feet, only slightly taller than Bumblebee whereas in previous films he stood at taller heights of 21 and 20 feet tall respectively. 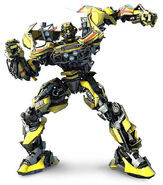 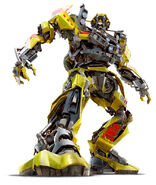 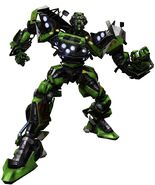 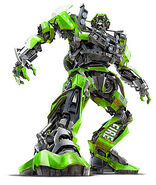 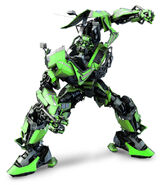 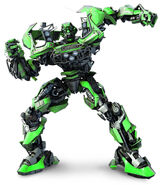 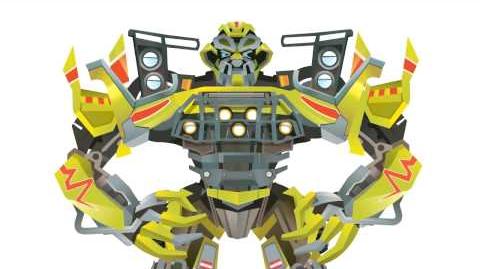