Hanging out with Raven (formerly)

Fight against the Teen Titans (formerly).

Stop threats and her father.

Ravager (real name Rose Wilson) is a fictional character and anti-heroine in the DC Comics universe. She is a member of the Teen Titans and the illegitimate daughter of Deathstroke, and sister to Ravager (Grant Wilson), and Jericho (Joseph Wilson).

She was created by writer Marv Wolfman, and artists Art Nichols and Will Blyberg, and first appeared in Deathstroke # 15 in October of 1992.

Ravager made her first live appearance in the second season of the television series of Arrow, played by Summer Glau. This version was Isabel Rochev who was initially a partner at Queen Consolidated with Oliver Queen, however she was revealed to be allied with Deathstroke and bankrupted the company and its shares. Chelsea Zhang portrays Rose Wilson in the second season of Titans.

While initially Rose worked as a mercenary and protege to her father over time Slade Wilson's socipathy became more and more apparent to Rose and she left her father's side, instead siding with his nemesis Nightwing as a Teen Titan.

Rose Wilson is the daughter of Slade Wilson and Lili Worth, who met each other on a search and rescue mission a few years after Slade's divorce from Adeline Kane. Slade's mission was to make sure that Lili escaped from Cambodia, and the two had an affair during their two week journey to Thailand. Later, Lili became pregnant with Rose, and settled down at a brothel in New York City. When Deathstroke was injured and a fugitive from the law, Lili took him and nursed his wounds. Deathstroke's friend and butler, Wintergreen, discovered Rose and speculated that she was Slade's daughter.

Years later, Slade's half-brother Wade LaFarge, using the name Ravager, went on a killing spree. He discovered Rose, captured her, and told her that Deathstroke was her father. Lili and Wintergreen launched a rescue attempt, but Lili was presumed dead after she drove off a cliff while trying to run over Wade. Wintergreen later rescued Rose, and escaped from the area. Rose tried to reach out to her father, but he turned her away, fearing that he would put her in harms way due to being responsible for the deaths of his sons.

Deathstroke decided to leave her in the care of the Titans, and during a training exercise, she was injured and taken to the hospital. Her precognitive powers emerged for the first time when she had a lengthily vision of Deathstroke's future. Rose left the Titans shortly after, and did not see them again the Technis Imperium conflict, and she temporally allied herself with the team to save Cyborg.

Rose was taken into a foster family named Madison in Chicago, and Deathstroke decided to get close to Rise, and hired Ravager to kill Rose for $100,000. Deathstroken then anonymously alerted the Titans that Rose was in danger, and they fought to defend her. Deathstroke then captured Rose, and apologized for abandoning her and said that she was the only family he had left. Slade suggested that she become his apprentice, and offered Ravager as her first kill. Rose accepted, and took the name of Ravager for herself.

Deathstroke secretly injected Rose with the serum that gave him his enhanced abilities, and it caused her to suffer from psychosis. After working for a while, Rose hesitated and was unable to kill Jericho, her half-brother. Slade doubted Rose's readiness to work with him and planned to disown her. Rose decided to prove her loyalty, and gouged out an eye to match his missing eye, thus regaining his trust. After Rose was defeated by Batgirl, Deathstroke allowed Nightwing to train her. Nightwing agreed to train her, but only to teach her to lead a better life for herself.

In order to test Nightwing's loyalty, Deathstroke replaced Rose's missing eye with a Kryptonite one and pitted Nightwing and Rose against Superman. Rose attempted to kill Superman with kryptonite, but Nightwing told her that over time, the kryptonite would slowly kill her. Enraged that her father betrayed her, Rose broke ties with Deathstroke and ran away.

Though originally trained as a stoic mercenary of seemingly emotionless stature Rose is highly conscientious and concerned for others. Rose has a soft spot for children and is an over all Good Samaritan.

Rose has always sought her father's approval even after coming to terms with his irredeemable nature, because of her training though she is capable of moving passed such feelings when lives are on the line and often fights Deathstroke with lethal force.

Ravager was given training similar to her father and is an expert sword and gun wielder. Due to her father's genetic augmentations Rose was born with enhanced endurance, speed and strength. Like her half-brother, Joseph, Rose found herself born with psionic abilities, however unlike Joseph's power to possess people Rose's psionic powers only extend to minor mental shielding and precognitive abilities.

Rose has little to no training in her mental abilities and they only occasionally help her. At the end of the day Rose is far more reliant on her enhanced physical skills and training than her minor psionic powers. 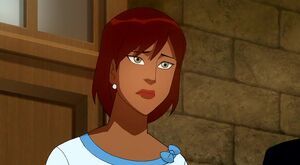 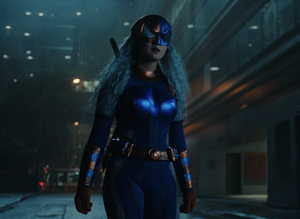 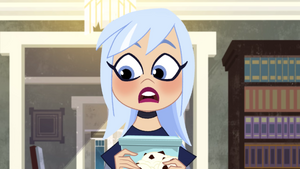 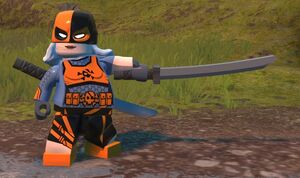