Raven is a supporting character in DC Super Hero Girls.

She was voiced by Tara Strong also voices her 2003 incarnation and reboot incarnation.

Trigon wants his daughter Raven to follow in his footsteps and rule the Underworld.

Raven helps save Metropolis after her portal causes an Earthquake, and discovers she wants to study at Super Hero High. Trigon reeks havoc on Super Hero High when he hears Raven wants to attend, and it's up to the Supers to stop him. Raven uses her magic to help stop Trigon, and might just convince him to let her stay at Super Hero High. 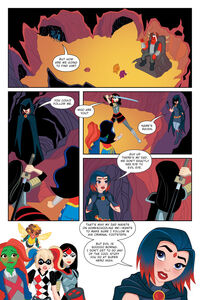 Retrieved from "https://hero.fandom.com/wiki/Raven_(DC_Super_Hero_Girls)?oldid=1841568"
Community content is available under CC-BY-SA unless otherwise noted.