Intelligence agent for the United Nations

To protect the world from evil.

To take down the Mishima Zaibatsu and G Corporation.
To stop Jin Kazama.
Kill Azazel.
To take down Sergei Dragunov.

Nameless Ninja
Raven (also known as The Dark Talon of Death) is a fictional character in the Tekken series. He is a character first introduced in Tekken 5 and returns for Tekken 6. Raven's ninjutsu fighting style is highlighted with his teleportation moves and extremely quick maneuvers. He is highly similar to Kunimitsu a female character who has not made a canonical appearance since Tekken 2. They do not have similar moves, but their techniques are similar.

He is a secret intelligence agent considered highly skilled and agile ninja, codenamed Raven. Apart from a scar in the shape of an "X" on his face, his aspects, including age and nationality, are unknown. Raven entered the fifth tournament to find out who or what was behind the event.

An international intelligence agent considered highly skilled and iron-hearted, codename Raven. Apart from a scar in the shape of an "X" on his face, his details, including age and nationality, are unknown. Raven entered the fifth tournament to find out who or what was behind the event.

Raven makes his first appearance in the opening movie for Tekken 5, as he witnesses the attack on Hon-Maru by the Jack-4s while on a mission to look into the Mishima Zaibatsu and G Corporation, as well as the subsequent explosion. It seems that he is the first one to report of Heihachi Mishima's supposed death.

During The King of Iron Fist Tournament 5, Raven encounters Heihachi Mishima, who was presumed to be dead. They began to fight, but before a victor could be decided, Raven received orders to return to headquarters, forcing him to withdraw from his battle with Heihachi. After their encounter, the battle between both the Mishima Zaibatsu and G Corporation intensified, with the Mishima Zaibatsu declaring itself an independent nation (declaring war on the world in the process). With the announcement of The King of Iron Fist Tournament 6, Raven is sent to investigate the Mishima Zaibatsu once again.

Raven also appears a co-star in the Scenario Campaign mode of Tekken 6. Raven follows Lars throughout the missions and appears as an enemy boss and is defeated by Lars Alexandersson and Alisa Bosconovitch. Later on, he returns to help Alisa and Lars escape from a rampaging NANCY robot and ends up defeating it. Once Alisa turns on Lars at the order of Jin Kazama, he becomes Lar's partner in Alisa's place for the final two stages of the mode. He joins Lars to chase down Jin in the desert. Lars and Raven go to a village, which is under attack by the Tekken Force. They eliminate all the soldiers with the help of assassin and astrologist Zafina, who later leads them to the Temple of Azazel.

With his help, Lars is able to defeat Kazuya, Azazel, Alisa, and Jin. After Jin defeats Azazel for good, he accompanies Lars with Alisa's body back to Lee Chaolan's robotics company. Lars attempts to thank Raven for his help but he declines, offering the ominous warning "Tomorrow, we may be enemies," before leaving Lars. Following the credits, Raven returns to the site where Azazel's temple once was to find Jin Kazama's half-buried body lying in the sand.

Raven is an enigmatic figure about whom little is known. He is distant and taciturn in all his associations. Even after allying with Lars Alexandersson in Tekken 6, he explains to him afterwards that it was an alliance of convenience that extends no further than the business he has now concluded. He is described as 'ruthless' and rarely lets his emotions cloud his judgment. Raven is also reserved and level-headed, as shown when calls in for back-up and additional orders if confronted with unexpected situations. 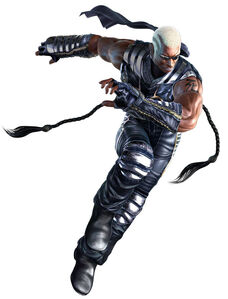 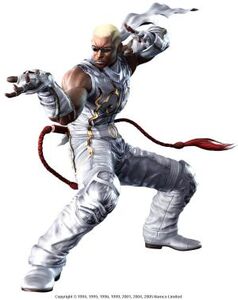 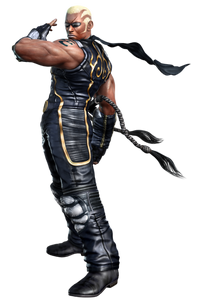