The Legend of Zelda: A Link Between Worlds


Implied magic of an unknown kind

Ravio is the Lorulean counterpart of Link and the deuteragonist of The Legend of Zelda: A Link Between Worlds.

He is described as the Lorulean counterpart of the main protagonist Link. He also helped Link on his adventures after the sages were abducted by Yuga (Ganondorf's Lorule counterpart). He helped Princess Hilda to see her mistakes, and to end her attempt to steal Hyrule's triforce. In the end, he says his thanks to Link and Zelda for saving Lorule and Hyrule from Yuga Ganon and lives with Princess Hilda.

Shortly after Link fails to stop Yuga from abducting Seres in the sanctuary, Ravio saves Link and brings him back to his own house, supposedly unaware that the house belongs to Link. After he awakens, he grants Ravio permission to stay in his house, where Ravio sets up his shop. If the player does not allow him to stay there, he will simply continue asking until the player concedes. Additionally, he gives Link his bracelet which at first doesn't seem like anything important, but is proven a life saver when Yuga turns Link into a painting after their first battle. The bracelet allows Link to not only escape imprisonment, but also to merge into walls to get past many obstacles and eventually travel between the lands of Hyrule and Lorule. This mechanic is also a component in a number of puzzles throughout the game.

Initially, Ravio will only rent items to Link and will send Sheerow to retrieve any rented items should the player fall in battle. He will begin selling off his wares after Link finds the Master Sword, and will thank Link for allowing him to make enough Rupees to retire early if every item in his shop is bought. All of the items in the game being available from the beginning allows the player to progress through the dungeons in a nonlinear fashion. This was first a response to criticisms given to A Link Between Worlds' predecessor, Skyward Sword, and was later incorporated into Breath of the Wild.

In Hero Mode, the player can find a diary in the Vacant House in Lorule. It is heavily implied that this diary and therefore the house, formerly belonged to Ravio. It's supported by the fact that the Vacant House is in the same location as Link's house. The diary is written in 3 days, formatted to possibly reference Majoras Mask. In writing, he states that he is running low on magic, and wishes for Hilda to recognize Yuga's manipulation.

After Yuga-Ganon and Princess Hilda are defeated and Princess Zelda is freed, Ravio returns to Lorule, where it is revealed that he is the Lorulean counterpart to Link. A loyal servant of Hilda's, Ravio did not agree with her plan to steal Hyrule's Triforce. Yuga's intimidation and Ravio's cowardice pushed him to flee to Hyrule, hoping to find a hero who could stop Hilda and Yuga. He successfully convinces Hilda that stealing Hyrule's Triforce would only bring out the worst in Lorule, which was exactly the scenario their forebears had hoped to avoid when they destroyed Lorule's Triforce, and the two see Link and Zelda off as they return to their own world.

After Link and Zelda wish on Hyrule's Triforce to restore Lorule's Triforce, Ravio and Hilda are seen in the Sacred Realm of Lorule as the clouds part and their Triforce is restored.

Ravio appears in Super Smash Bros. Ultimate as a advanced support spirit that grants the user a Killing Edge at the beginning of the battle. His spirit battle is a timed battle on the Skyloft stage against Young Link that favors special moves and is easily distracted by items.

Unlike Link, Ravio is cowardly and lazy, which is in sharp contrast to Link's courageous and adventurous personality. He does, however, have a good heart like his counterpart, shown in his compassion for Hyrule and devotion to Lorule. Like Link, Ravio cares for his homeland and Lorule's Princess Hilda, who Ravio was a faithful servant of until she was manipulated by Yuga into stealing Hyrule's Triforce. Ravio realized the consequences of Yuga's plans and that Hilda's desire to steal the Hyrule's Triforce, was the very reason her predecessors destroyed Lorule's Triforce, showing that Ravio possesses great wisdom and a noble heart, though his lack of courage prevents him from taking on the role of Lorule's Hero.

However, despite his opposition to Hilda and Yuga's actions, he was too much of a coward to actively oppose them, instead deciding to seek out his heroic counterpart and assist him. He chose to keep his true identity hidden under his large rabbit hood from Link. Despite his decision to aid his counterpart, Ravio appears to have the mindset of a merchant, providing Link with equipment and items in exchange for Rupees, hinting that Ravio is somewhat greedy when it comes to money. He is shown to be protective of the large sack he carries his Rupees in. However, close to the end of the game it is revealed the contents of this sack are a measly three green Rupees. It is implied that through his interactions with his counterpart, that Ravio has gained a better understanding of himself and he even suggests that some of Link's courage may have rubbed off on him. This is greatly exemplified by his willingness to confront Hilda over the consequences of stealing Hyrule's Triforce, ultimately managing to dissuade Hilda from stealing the Triforce. 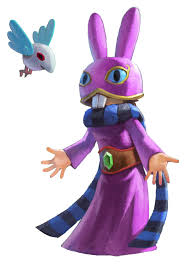 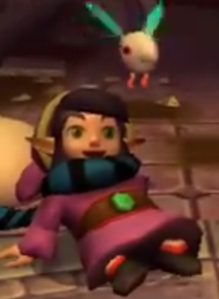 Ravio's endearing grin after the Lorule Triforce has returned thanks to Link and Zelda. 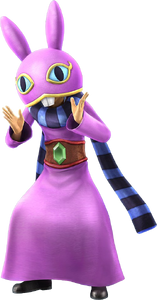 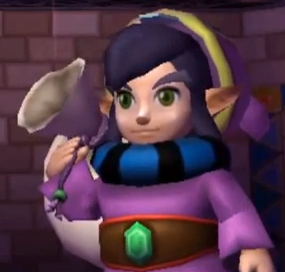 Ravio with his mask removed