Being Childishness and do what he wants

Get rid of Swellview crime

Captain Man (real name: Raymond "Ray" Manchester) is the overall main protagonist of the Henry Danger franchise. He is the deuteragonist of Henry Danger, and the main protagonist of its sequel Danger Force. He is Henry Hart's, Charlotte Page's,Jasper Dunlop's, and Piper Hart's former boss. He and his mechanic Schwoz are continuing characters in Danger Force as main characters where they are training a new generation of superheroes.

He was portrayed by Cooper Barnes.

Captain Man could be the anti-heroic deuteragonist of Henry Danger due to his reckless and self-absorbed nature which gives him the habit of making really bad decisions and never learning from them.

Raymond was born to scientist Carl Manchester and an unnamed mother. He was an ordinary human being just like everybody else, who lived in a town called Swellview. But that would all change when one day, 8-year-old Ray, who was skateboarding in his father's laboratory during take your kid to work day, accidentally skated towards his father's indestructible machine, the Trans-molecular Densitizer, pushing the lever in the process and gaining the power of indestructibility. His father saw the whole change and to test this theory, he scanned Ray with a detector to see if he really became indestructible. The results were positive and Carl whacked Ray with the detector in the head, with Ray only feeling pain for a second. With his son now indestructible and happy that he is okay, Carl told Ray he would grow up and do special things. Thus Captain Man was born and he would fight crime in the city of Swellview. He eventually realized he could not do so alone, employing a sidekick, Kid Danger. They fought crime together for about 6 years before Kid Danger's "death".

He never went camping, rode roller coasters, or learned how to ride a bike (he was also pulled out of school by his father, possibly out of fear his newfound powers would harm those around him were he not careful). One motivation for him to fight is when a street gang known as the Wall Dogs vandalized his playhouse when he was still a boy.

Ray/Captain Man has brown hair, blue eyes, and a strong build. He is immature, yet sarcastic, witty, and funny. He has a fun spirit, a big ego, and likes to be romantic. As shown on several occasions, he hates to lose and wants things to go his way. Ray is also a bit cocky and arrogant at times. When not in uniform, Ray wears casual clothing such as long-sleeved shirts or short-sleeved, jeans, and sneakers. His hair is normal in his civilian form. In Danger Force, He is shown to get sensitive and feels lonely when his former sidekick, Kid Danger is mentioned.

In Danger Force, he got an upgrade on his suit and wears a blue, red, and silver suit with yellow lining and a symbol on his chest resembling a hurricane, tilted. On his face, he wears a blue mask with a gold line on the top. He wears a black utility belt with his symbol on the buckle. He wears black and red boots and red gloves with black fingers and knuckles and yellow lining. His hair is groomed to the right side. 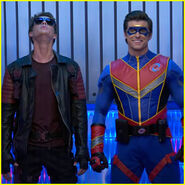 Retrieved from "https://hero.fandom.com/wiki/Ray_Manchester_(Henry_Danger)?oldid=2077063"
Community content is available under CC-BY-SA unless otherwise noted.