Avenge Ana's death
Stop Ra's al Ghul from destroying Star City with the Alpha/Omega virus
Defeat Vandal Savage
Defeat the Legion of Doom
Stop the anachronisms, defeat Mallus and save Nora Darhk
Save the Multiverse from distruction during the Crisis of 2019
Stop the Anti-Monitor (all succeeded).

Ray Palmer is a major protagonist in the Arrowverse. He is a supporting character in both Arrow and The Flash, and one of the main characters of DC's Legends of Tomorrow. In this version, Ray is the CEO of Palmer Technologies, the former fiance of late Anna, and the ex-boyfriend/best friend of Felicity Smoak. Ray used a powerful exo-suit called the Advanced Technology Operating System to be a vigilante in Starling City known as the Atom. He is currently one of the members of the Legends.

Ray Palmer and his fiance Anna were attacked by Slade Wilson's soldiers during Slade's city wide riot to attack Oliver Queen. Ray tried to fight the soldiers, however his leg got broken and Anna was murdered by the terrorists. Ray promised himself that he would never kiss another woman again and that he would protect Starling City from danger.

Ray visited a Tech Village shop in Starling City to purchase a satellite frequency communicator which made Felicity suggest to him that he buy the TX50 model and to use a remote administration tool. Ray used the satellite frequency communicator to hack into Queen Consolidated's servers to find any data on how the company is operating in order to convince the shareholders to sell Queen Consolidated to Palmer Technologies. Ray even proposed that Starling City be renamed to Star City.

Ray started to work on a powerful exosuit to help the good people of Starling City. Ray was able to purchase the rights to a mine with help from Felicity so he can locate a dwarf star alloy so he and his suit can shrink to atomic size. Ray was able to complete his suit in time when the Arrow was being framed for murdering mobsters. Ray ended up discovering that Oliver Queen was the Arrow and got angry at Felicity when he discovered her connection to the man who he thought was a criminal. Ray made a fake 911 fake call to get Oliver and Roy Harper to come over to a warehouse where he attacked them in his Atom suit. Ray defeated Roy and was prepared to capture Oliver, until Oliver noticed a weak spot in his suit and damaged it. Oliver proved Ray wrong by not killing him. Ray tried to prove that the Arrow was framed before watching Celia get killed and saving Felicity from an Arrow impersonator.

Working With The Flash

In order to improve the suit, Ray and Felicity went to Central City to seek assistance from Dr. Harrison Wells, Dr. Caitlin Snow, Cisco Ramon, and meets Barry Allen who is the scarlet speedster known as the Flash. Ray became good friends with Cisco Ramon since they loved designing stuff, had senses of humor, and loved naming super criminals. Ray started to have dinner with Felicity, Iris, Barry, and Eddie which didn't go so well since Iris was mad at Eddie. Ray helped Barry rescue Tina Mcgree as the Atom and managed to crash into Cisco and Caitlin's S.T.A.R Labs van just before his suit runs out of power.

Teaming Up With The Arrow

Ray started to work with Team Arrow in handling a meta human named Jake Simmons, Ra's Al Ghul, and the League of Assassins. Ray ended his relationship with Felicity so she can be with Oliver once he saw how Felicity had the hots for him and because Ray was a selfless person. In the season 3 finale of Arrow, ray is able to shrink down his suit after tampering it with nanotechnology which caused a large explosion in the Palmer Technologies building at Starling City.

Ray teamed up with Oliver, Barry, and Hawk Girl to deal with the Reverse Flash

He's socially awkward, confident in himself, selfless, and is willing to do whatever it takes to achieve his goal such as working day and night on his suit with little food and sleep. Behind Ray's positive attitude is a sad side since he lost his fiance Anna when she got killed by terrorists which is why he is devoted to helping people. 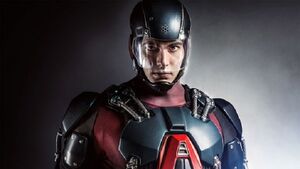 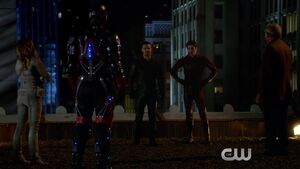 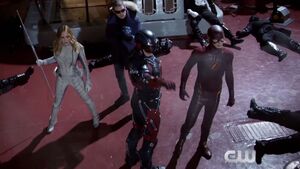 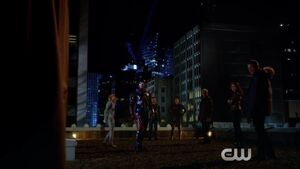 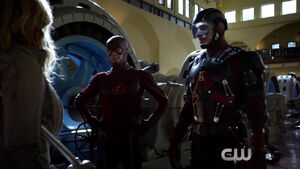 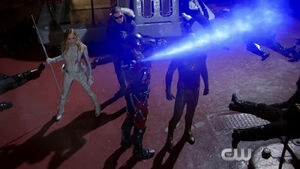 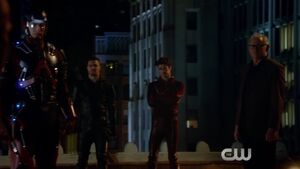 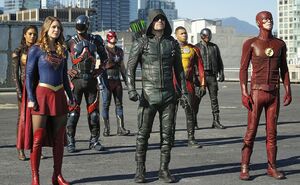 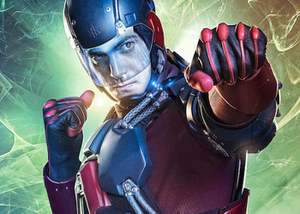 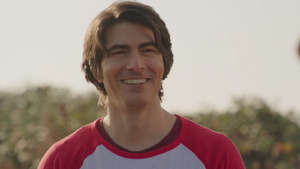 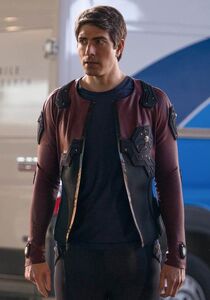 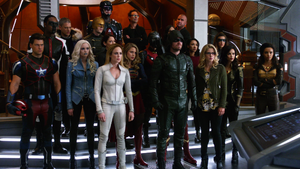 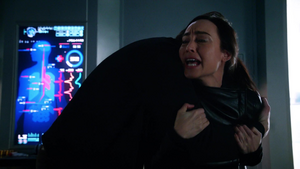 Ray comforting Nora over her father's death.
Add a photo to this gallery

Retrieved from "https://hero.fandom.com/wiki/Ray_Palmer_(Arrowverse)?oldid=2198248"
Community content is available under CC-BY-SA unless otherwise noted.