Dr. Raymond Stantz is one of the main protagonists and the original Ghostbusters and was one of the most devoted to the pursuit of studying the paranormal. He appears in all major forms of the Ghostbusters franchise. However, like Peter and Winston, Ray was a guest on Extreme Ghostbusters.

He was portrayed by Dan Aykroyd, who also played Clifford Skridlow/Doctor Detroit in the 1983 comedy film, Doctor Detroit. He was the voice of Chip in the 1998 animated film Antz and Yogi Bear in the 2010 film, Yogi Bear. In The Real Ghostbusters and Extreme Ghostbusters, he was voiced by Frank Welker.

Before they were kicked out of the University, Ray was devoting a lot of his workday to interviewing people who had some sort of encounter with the paranormal. After the entanglement with the library ghost, Ray was more motivated to continue on with that type of work. When the guys were let go by Dean Yager, he was initially crushed, primarily concerned with his academic integrity, financial stability, etc. Ray had briefly worked in the private sector beforehand, and knew it wasn't conductive to his line of work, as they expected notable results.

After talking with Peter Venkman, his former lover, and Egon Spengler, they all decided to try hunting ghosts full time. Ray even mortgaged the house he was born in to provide the starting capital to get the company started and buy the firehouse. In addition, he rummaged through used car lots to find a suitable vehicle and repair it to make the Ecto-1.

Dr. Stantz also has the distinction of being the first Ghostbuster to meet Slimer. Unlike his other continuity, however Ray dropped his cigarette in fear. He then went proton blasting, after his call for assistance was unheard by Venkman.

Ray accidentally chose the form of Gozer's appearance because of his childhood times at Camp Waconda. Despite his initial attempt at negotiations, he wound up fighting Gozer with his Proton Pack. After reversing the particle flow to force Gozer back into his realm, Ray was concerned about the other guys' welfare after the explosion, and then celebrated with them all afterward. Although this was short-lived by the, "ungrateful, yuppie larvae!" representing the city, county and state of New York.

In the second film he and Winston were entertainers for parties. When he was not doing that, he was running his bookstore, Ray's Occult Books. However, when Dana Barrett comes to Egon and later Ray, it becomes clear that something supernatural was happening underneath New York.

Ray and Egon experiment with the Psychomagnotheric Slime they find and eventually discover a way to not only positively charge the slime, but utilize it to animate the Statue of Liberty in their final assault on Vigo the Carpathian. Ray also briefly becomes the host for Vigo himself, but a liberal dousing of the positively charged mood slime quickly cures him of that.

In Ghostbusters: The Video Game, Ray is one of the senior 'busters. He is voiced by none other than Dan Aykroyd and thus is similar to his movie counterpart. He is still the wide-eyed enthusiast and still more than eager to expand his knowledge in regards to researching the paranormal. More than once he asks the Rookie to collect samples and take readings for later research. Ray is also the most vocally supportive of the Rookie.

It is mentioned that the mortgage for the Firehouse is in his name. His selection for the Stay Puft form of Gozer's "Destructor Form" was mentioned in a quote "It wasn't me this time, I swear it!" when the 'busters see that Stay Puft is, once again, terrorizing New York. Ray is the most visibly shaken to see Mr. Stay Puft again. 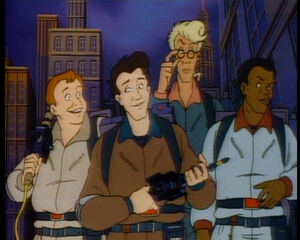 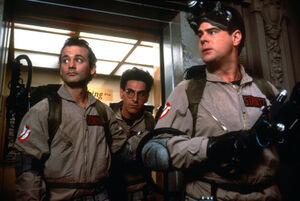 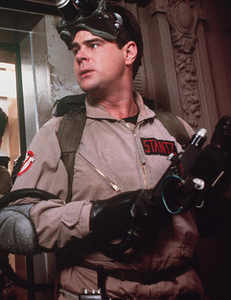 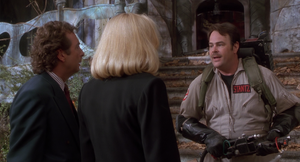 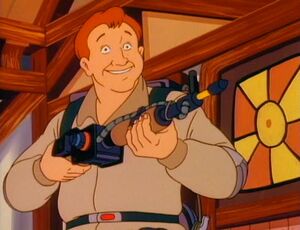 Ray in The Real Ghostbusters 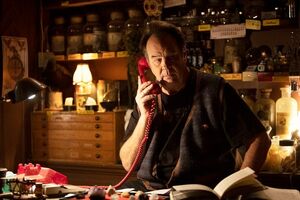 Ray along with Peter Venkman and Winston Zeddemore in Ghostbusters: Afterlife