Dep La (by Namaari)
My Girl Raya (by Sisu)

Raya and the Last Dragon

Guardian of the Dragon Gem

Retrieve the Gem pieces and use its power to vanquish the Druun for good (Succeeded).

Raya is the main protagonist of Disney's 2021 animated feature film Raya and the Last Dragon.

She is the daughter of the Heartlands' Chief Benja, having been trained to be the Guardian of the Dragon Gem. After the Druun returned following the shattering and theft of the Dragon Gem, Raya set out on a quest to find the Last Dragon to help her reclaim and reunite the pieces of the Dragon Gem. She is also the former archenemy of Namaari.

Raya first appears in her youth, tested by her father for the role of the Guardian of the Dragon Gem, which gives the powers of Sisu and protects Heart from the Druun. She successfully passes and earns the title. Chief Benja invites the Tail, Talon, Spine, and Fang Lands to join in a feast. During the party, Raya befriends Princess Namaari of the Fang Land. They immediately bond and form a close friendship due to their shared interest in dragons. Namaari gives Raya a dragon-shaped pendant. In return, Raya reveals to Namaari the hidden location of the Dragon Gem, only to be ultimately betrayed by her.

The other nations soon arrive to their location and fought over the orb. As a result, the Dragon Gem was shattered into five broken pieces and awoke the Druun. During the evacuation, Raya has trouble carrying her injured father to safety. Knowing they won't make it, Benja sacrifices himself to give Raya a piece of the orb and throws her off the bridge into the river below. As she falls, Raya is forced to watch her father get turned into a stone statue by the devouring plague and can only scream as the current drifts her away.

Six years later, Raya is venturing across the Tail Land, hoping to find Sisu, the last living dragon who can help her save Kumandra and restore her father. After searching from river to river, Raya comes across an old shipwreck at the very end of the land. She places offerings and succeeds in awakening the water dragon from her long slumber. Sisu agrees to help her find the remaining pieces of the Dragon Gem. Raya and Sisu travel on Tuk Tuk to the home of the Tail Land's chief. Raya successfully avoids all the traps placed within and carefully removes a gem piece from the remains of the chief, who died to her own traps. Namaari arrives with her army and the trio quickly escape to a boat called, “The Shrimporium”, owned by a boy named Boun. The group then heads to the Talon Land.

Arriving at Talon, Raya encounters a “con-baby” named Noi and her Onjis, who steal the gem fragments. She chases the thieves throughout the market and eventually catches up to them. With their help, Raya is able to infiltrate the home of Talon's chief, Dang Hu. She accidentally mistakes him for another person and finds out he is already long gone, with a new chief in his place. The new chief tricked Sisu to be stuck with the Drunn if she doesn't reveal the location of the other Dragon Gem pieces. Raya arrives on the scene, snatches a gem piece from the chief and rescues Sisu. They return to Boun's boat with Noi and her Onjis and headed to the Spine Land.

At the Spine Land, Raya and Sisu ended up being captured by a formidable giant named Tong, the lone survivor of his people. When Namaari and her army arrive at the front gates, Raya pleads Tong to take her friends to safety while she buys them time with the enemies. Her friends followed the plan while she fought Namaari. The Fang princess gained the upper hand during the fight and was about to finish Raya until Sisu jumped in and saved her life.

Back on the boat, Raya finally reveals Sisu's secret to her friends and they agree to work together to get the final piece of the Dragon Gem from the Fang Land. Raya originally planned for the team to sneakily infiltrate the kingdom, but she was persuaded to follow Sisu's plan of befriending Namaari. She decides to return Namaari's pendent as a gift and tell her to secretly meet her in the forest via letter. For the night, Raya shares a meal with all of her friends.

The next morning, Namaari meets with Raya as promised and presents the final piece of the Dragon Gem, but is betrayed again when her old friend pulls out a crossbow. While Sisu trusted Namaari, Raya did not, causing her reckless action to deflect Namari's arrow at Sisu instead, killing her. Blinded by rage, Raya heads to Fang alone and confronts Namaari. Upon defeating her, Raya realizes that her inability to trust others and rage had caused chaos to Kumandra and Sisu's death.

Instead, she spares Namaari's life and left to help her friends evacuate Fang's citizens away from the Druun. When the gem's pieces start to lose power and the Druun spreading closer, Raya decides to take the first step. She gives her gem piece to Namaari and turns into stone. Her friends did the same and turn into stone beside Raya. Namaari makes the choice to put all the pieces together before becoming petrified as well. After the Dragon Gem regains its power, Raya and all the infected victims are brought back to life. With Sisu and the dragons restored to Kumandra, Raya hugs her friends before returning home.

Arriving back at the Heart Land, Raya reunites with her father and the two celebrate with the other nations, as Kumandra is united again.

Raya is a headstrong young woman who is mature and wizened for someone her age. She is a very capable person and is shown to easily adapt to situations around her. Likewise, Raya has become cynical as a result of the Druun attack on her homeland, to the point that she doesn't trust anyone else anymore. She still cares about others, though, and has the capacity to be very kind and compassionate when the situation calls for it. Over time, her interaction with Sisu helps Raya overcome her trust issues, and learn to trust others again. 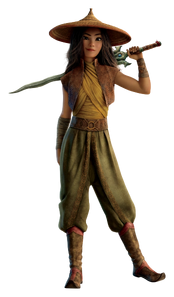 Raya walking through a secret passage.

Raya being defeated in the training session.

However, Raya reveals she actually won by getting her toes to touch the floor closest to the Gem.

Raya and her father looking at the Dragon Gem.

Raya after she becomes a guardian of the Dragon Gem.

Raya accidentally knocked to the ground.

Sisu: My girl Raya and I are gonna fix the world.