Protector of the Glade of Dreams

Protect the world and his friends from villainy.

Rayman is the main protagonist of the video game series of the same name created by Ubisoft game designer Michel Ancel. He first appeared in 1995 on the Atari Jaguar, Sony PlayStation, Sega Saturn, and MS-DOS.

Rayman's true personality is not explored deeply in the series, though most of the time he is a cheerful character with a good sense of humor. He is also very helpful and is willing to take on whatever challenges face him for the sake of the safety and harmony of his world. Sometimes he can be a little childish, especially in the original game, as he often pulls grimaces as a form of defense. According to the now-defunct Rayman's World website, he is brave, funny, and also highly close to nature. In one interview, developer Natalie Paccard discusses the development of Rayman's personality between the two games: 'the original Rayman was a platform game, Rayman 2 is an action game.

The universe has also evolved a lot, and so has the character. Rayman 2 is a bit older, able to do more things and loves a good fight. He is less childish. The game itself includes more action and more tricks.’ In later games, Rayman becomes somewhat self-absorbed, especially in Rayman Raving Rabbids, as the Rabbids start to treat him like a celebrity during his captivity, though he is seen remembering and worrying about the baby Globoxes that he left behind. That, however, seems to be put behind him as the Rabbids continue to harass him in Rayman Raving Rabbids TV Party. It is revealed through interviews with Michel Ancel that Rayman was meant to be a bit of a show-off who does not take himself too seriously. This aspect of the character was supposedly overlooked during Rayman 2 because of Ubisoft's focus on the environments of the game. It was in Rayman 3 that Ubisoft tried to show Rayman's true personality, giving him an updated look to match his newfound attitude and charisma. A Rayman 3 press release stated that ‘Like his core gaming audience, Rayman as a character has matured and now has a wilder edge, only hinted at in the earlier games.

However, in Rayman Origins, Rayman seems to have recovered part of his childish personality; he bears a more joyful, careless, and impulsive attitude, though he keeps the heroic spirit that characterized him in previous games. While the trailers and other commercial media described him as a "New Crazy", Michel Ancel explains Rayman and Globox's personality: 'They're the kind of characters who look... stupid, really, but they're not stupid, just simple. And all they really want to do is just focus on doing their job, no matter what.' When Rayman Origins was still developed as a prequel, the newborn Rayman was intended to bear a more immature, confused and unintelligent personality, blowing Betilla's skirt with his propeller hair and annoying the magic people; the game was initially focused on Rayman and Globox's personalities and how they evolved over time to become the heroes of the Glade of Dreams; the concept was changed when the game became a sequel.

In Rayman Legends, he is seen with a mostly unchanged personality from Rayman Origins, although it is presented in a more serious tone.

Rayman has to defend his home from the clutches of Mr. Dark, who has stolen the Great Protoon from its rightful resting place, disrupting the balance in the world. He gets help from Betilla the Fairy and the Magician. This game introduces many of Rayman's well-known traits including his helicopter-hair and his long range fist-throwing.

Rayman appears again to fight against Admiral Razorbeard and the Robo-Pirates in Rayman 2. In this game, many of Rayman's friends and introduced including Globox, Ly, Murfy, and The Teensies. In this game it changes his fist-throwing to shooting energy balls.

In 2003. Rayman 3: Hoodlum Havoc was introduced into the already popular and famous francise where Rayman dealt with an evil black lum, called Andre who appears to want to enslave the world by force using his huge Hoodlum Army and a Knaaren champion called Reflux. After this, another game was introduced to the story which is a direct sequel to Rayman 3: Hoodlum Havoc, called Rayman: Hoodlum's Revenge.

Rayman is revealed to have been created by the fairies to protect the Glade of Dreams.

Rayman appears as an collectionable trophy in Super Smash Bros. for Wii U. In Super Smash Bros. Ultimate, Rayman appears as an ace-ranked primary neutral-type spirit in world of light who increases the user's jump power. His spirit battle is a starmina battle against black Sonic who have increased the physical attacks on the battlefield form of the great cave offensive. Sukapoon can be summoned as an hostile Assist Trophy.

From 1995 onwards, Rayman has had his appearance changed slightly for each game, to be able to give him more expressions. He is typically found wearing white gloves, a red scarf (or hood as seen in Rayman 3), a purple shirt with a white "O" on it, and yellow sneakers. The O appears to have magical properties. Whenever he earned a new power in Rayman, sparkles would appear around the O; in Rayman 2, it was used to open the stones holding the masks. While he appears to have no arms or legs, his feet and hands are somehow connected to him but can be removed and reattached. Rayman is made up of electoons as shown in the first game. When he dies, he transforms into five or six electoons which quickly zoom towards the sky.

However, he has been known to change appearance, beginning from Rayman 3 onwards. While the different "combat fatigues" only caused changes to Rayman's hair, shirt, and shoe color, players in Rayman Raving Rabbids are able to dress Rayman in a variety of costumes. They start with the choices of Disco, Gangsta, and Grandmother. As more mini-games are unlocked, other costumes, such as Rock 'n' roll, Disc jockey, gothic fashion, and Bunny become available. Even more costumes, such as Hippie, Dracula, and Caveman, are added in Rayman Raving Rabbids 2.

His appearance and persona matches that of a typical teenager.

Rayman has a few unique powers that he retains at all times, mainly those granted to him by Fairies. First of all is the far reach of his fists. Being limbless, Rayman is able to launch long range punches at his enemies. He does not display this in Rayman 2, instead throwing energy spheres at his enemies. However, Rayman 2 is the only game where he retains this power; he uses his fists to attack once again in Rayman 3. In Rayman Raving Rabbids, players use the Wii Remote and Nunchuk to control his movements rather than attacks due to the mini-game based nature. Another well-known power of his is the ability to use his hair to not only glide, but also to be used as a mini-helicopter. Most of the time, Rayman is unable to ascend. However, in certain situations where he is given an extra boost, he is able to power it up and go wherever he pleases.

Rayman 3 introduced power-ups known as "combat fatigues" or "Laser Washing Powder". These not only changed Rayman's appearance, they give him a specific move depending on the can he picks up. There are five of these in total, known as the Vortex (ability to lower certain platforms and shrink enemies), Heavy Metal Fist (powerful metal fists able to knock down big obstacles), Lockjaw (grabs onto flying rings similar to Purple Lums, and electrocute enemies), Shock Rocket (hand-guided rocket able to reach far away targets), and Throttle Copter (helicopter). However, these powers are only present in Rayman 3 and have not been mentioned in any other game to date. (refer to Rayman 3: Hoodlum Havoc)

In Rayman 3, Rayman's hands are shown to have a life of their own. At the end of the game, as he is sleeping, they crawl away from his body and intentionally frighten a red lum. Frightening a red lum causes it to transform into a black lum, and so Andre is born once again. Though it is done comically and the consequences are never looked into, the fact that Rayman's hands may be malicious cannot be ignored. That said, his hands may not understand the true consequences of their actions and may just be mischievous. They are, after all, simply hands. Additionally, in Rayman 3, a being called the Leptys gave him the power to transform Black Lums into Red Lums. This consists of Rayman making a ridiculous face. This is reminiscent of Rayman 1 when Rayman could make a weird face before obtaining the running power. This wasn't very useful, though he was able to scare some of the more cowardly hunters in the jungle with that face. Rayman is the main hero in Rayman Raving Rabbids 1, 2 and 3 and has the same look like in this picture. 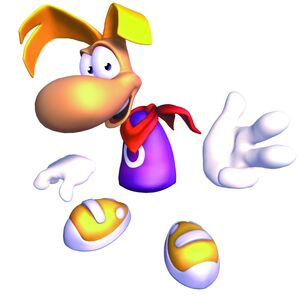 Rayman in Rayman 2: The Great Escape 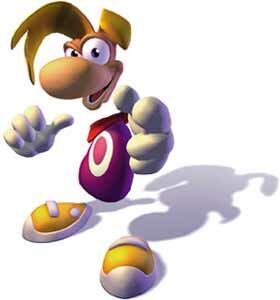 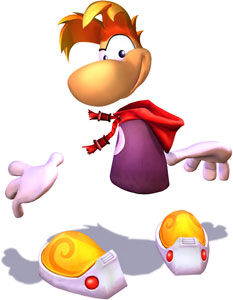 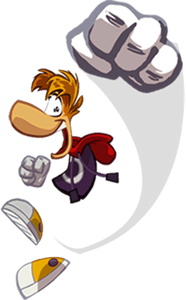 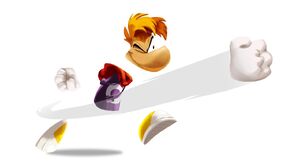 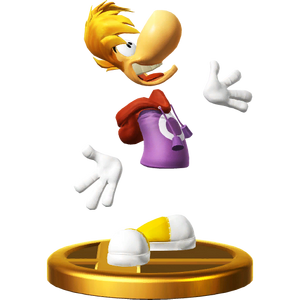 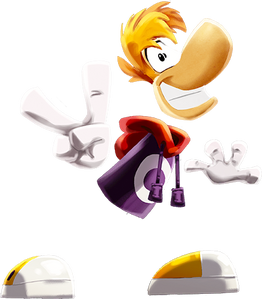 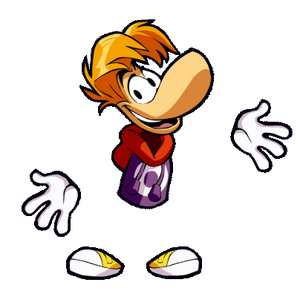 Rayman in Brawlhalla.
Add a photo to this gallery

Retrieved from "https://hero.fandom.com/wiki/Rayman?oldid=2266169"
Community content is available under CC-BY-SA unless otherwise noted.