Anthropomorphic Family
The Read Family are the main protagonists of the book and cartoon series Arthur who live in the fictional American town of Elwood City.

The Reads are a middle-class family that lives in the fictional American town of Elwood City. Most members of the family are anthropomorphic aardvarks. Throughout the series, their home address has repeatedly been inconsistent between 1125 Main Street, 562 Main Street, 962 Main Street, and 100 Main Street. The main family consists of David, the father, who works as a catering chef, David's wife Jane, who works as an accountant from home, their three children Arthur, the oldest, an average eight-year-old boy with glasses, middle child Dora Winifred (preferring to be called D.W.), a bratty four-year-old girl who is short-tempered, a picky eater, and enjoys annoying Arthur and getting him into trouble, but is otherwise a caring person and quite intelligent for her age; and Kate, Arthur and D.W.'s baby sister who is very smart for a baby and finds grown-ups and older kids weird. They also have a pet dog named Pal, whom Kate has the ability to talk to, but whom D.W. finds stupid. Even though milestones such as birthdays and holidays have passed over the course of the series, no member of the family is ever shown to physically age outside of imagination/dream sequences, and still look the same as they did when the series began.

The earliest known members of the Read family are Gustav, the grandfather of Grandpa Dave, and Grandma Thora's unnamed father and mother, the latter of whom is somehow still alive despite her daughter being in her 60s. Thora's father also has a still-living brother, Theodore, and a deceased sister, Dora Winifred Read, whom D.W. was named in honor of. It is unknown who Gustav married, but Thora's mother is said to have married an unnamed man with whom she had two other kids besides Thora. It is also unknown who Dave and Thora themselves married, but they had Jane and David respectively with their spouses, and Jane and David married and had Arthur, D.W., and Kate. 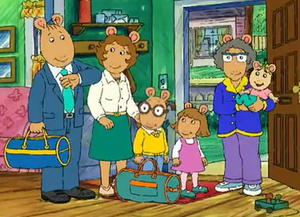 The Reads on Thanksgiving
Add a photo to this gallery

Retrieved from "https://hero.fandom.com/wiki/Read_Family?oldid=2130653"
Community content is available under CC-BY-SA unless otherwise noted.