Working as a university professor.

On July 23, 1998, Rebecca was sent into the Arklay Mountains on her first case to investigate a series of cannibalistic homicides. Bravo team's helicopter broke down over the Raccoon Forest, and an emergency landing was made. The team did not know that this was intentional. During Bravo team's search around the area, they discovered the wreckage of a military police van and found the corpses of the driver and guard, along with the document of a prisoner: ex-Marine lieutenant Billy Coen, who was being transported to a military base for execution.

Upon further investigation of the area, Rebecca split from the group and discovered the Umbrella Corporation's private company train, the Ecliptic Express. Within the train, Rebecca immediately encountered the passengers, who had already succumbed to the t-Virus infection and turned into zombies as a result of an earlier attack. Rebecca was able to defend herself for a while, and eventually came across the fugitive, Billy Coen. After witnessing the death of Bravo team member Edward Dewey, as well as the appearance of Cerberus, Rebecca reluctantly agreed to an alliance with Billy.

The train began to move again, due to the dexterous manipulations of Umbrella operatives already sent by Albert Wesker and William Birkin. Securing the control cabin, the train was sped up to reach the abandoned Umbrella Research Center within ten minutes. The team was attacked by mutated leeches, who had adopted a hive-mind. Rebecca and Billy managed to reach the cabin after finding the key card hidden in a briefcase.

Finding the controls locked, Billy realized that the train's controls were damaged while speeding up, meaning that it would derail and crash- killing them, if they didn't use the train's emergency brakes. Rebecca ran to the rear of the train to activate the emergency brake controls on that side, while Billy stayed in the cabin to operate the brake controls in there. On her way, she discovered Edward, now reanimated as a Zombie. Unable to stop him walking towards her, hungry for flesh, Rebecca was forced to kill him.

Rebecca and Billy finally activated the emergency brakes, but it was too late to stop the train. The train exploded through a tunnel into the Training facility's station, impacting on the track's buffers and its carriages hurled across the room. Despite the odds, the two survived the crash in good condition.

Now on new ground, the two explored the expansive training facility and its laboratory, uncovering brief dark moments in the facility's history, such as the use of Bio Organic Weapons, the director's developing insanity, and the growing rivalry between two employees, one of whom had the same first name as the head of S.T.A.R.S.

The two would find trouble several times, however, leading to Rebecca being attacked by an enormous centipede, and nearly falling to her death after being attacked by a monkey; fortunately, Billy arrived in time to save her life. Afterwards, Rebecca, having her doubts about the charges against Billy, questioned him about it. Billy revealed that, operating under false information, his unit made their way to an African village believed to be used as a terrorist training ground, but it was actually full of innocent civilians; unwilling to go back empty-handed, Billy's commanding officer ordered the villagers' executions and used Billy as a scapegoat.

After starting up an underground gondola, Billy pushed Rebecca out of the way of an attacking Eliminator, the two falling down into the waters below. On her own, Rebecca made it to the other side, where she found Captain Enrico. Telling him about losing Billy, Enrico agrees to let her look for him, as long as she is careful. After this, he heads back to his team's meeting point.

On her way to an elevator, the steel shutter behind her closed, and a monster attacked from behind the rubble. Defeating the beast, she went down the elevator and found Billy in the water below. After activating the facility's dam, the two found each other, but to their horror, the bones of many people used in the director's experiments had been thrown around where they were standing. Determined to get out of the place alive, the two fought insurmountable odds before reaching the exit. There, they found the director, James Marcus, unusually youthful looking for an elderly man.

The doctor explained to them that his gruesome death at the hands of Umbrella and with his trusting students Albert and William, and his rebirth from his leeches, he is the man who spread the t-Virus. The doctor suddenly began to vomit out leeches before mutating into a sickening Leech-like foe.

Although he seemed impervious to firearms, Rebecca and Billy quickly discovered that Marcus was vulnerable to sunlight. Billy baited Marcus, while Rebecca was opening the roof hatch eventually exposing Marcus to the light of day. Rebecca tossed Billy a Magnum, who fired at the creature in its weakened state, killing it. The monster plummeted down a cargo elevator shaft, while flames went up as the facility's auto-destruct timer ended. The two escaped just before the training facility/mansion exploded. Rebecca took Billy's Dog Tag, a symbol of a soldier's death, to give Billy a chance of freedom. Afterwards, Billy walked into the trees, never to be seen again. Looking down the cliff edge, Rebecca noticed another mansion; which she remembered Enrico having told her about.

After splitting up with Billy, Rebecca reached the mansion later that morning, only to find no one there. Tired from her experiences of the previous night, she fell asleep in one of the servant dormitory's bedrooms. During the night of the July 24th, she had recurring nightmares regarding a giant snake and was eventually awoken by fellow Bravo team member Richard Aiken.

The two searched the grounds for Marini, whom they relied on for safety after the team split up. However, due to a heightened amount of Web Spinners, the two were forced to abort the search of the grounds and went into the mansion, unaware that their captain would soon come into the dark tunnels near the spider's den. Upon arriving at the mansion and fending off some monsters, she and Richard began to realize the events at the mansion were connected to the Arklay murders they had been investigating, so they agreed that they needed to focus on survival first and foremost. While navigating around the Mansion, she and Richard also witnessed Sergei Vladimir and an Ivan carrying a body bag towards the woods, causing them to become suspicious of the entire affair. After being attacked by a flock of crows, which Richard scared away with gunshots, Rebecca wondered if she and Richard were the only members of Bravo Team left. However, their conversation was short-lived when they were ambushed by a giant snake. They were forced to flee, eventually managing to temporarily evade via the hallways. They encountered the snake again in the attic library. After a lengthy battle, Richard shoved her out of the way when the snake went after her. She hesitated to shoot the Snake out of risk of hitting Richard, instead deciding to aim for the lower body. This irritating it enough to spit out Richard and flee. Richard told her to have hope that someone would rescue them, but Rebecca was struggling with the feeling that their situation was hopeless. Alpha Team was sent to rescue Bravo team, and Rebecca was found by Alpha team member Chris Redfield, whose team faced a similar problem to that of Bravo team. Richard would give Chris his radio so he could call for help, not knowing that it was broken. Eventually, the two uncovered that the Alpha team leader; Albert Wesker, was the one who masterminded the deaths of several S.T.A.R.S. members and was personally responsible for Enrico Marini's assassination. She was shot by him, but she survived due to her bulletproof vest.

After awakening the monstrous Tyrant (T-002 Model), Wesker was swiftly impaled by its claws, dying temporarily. After escaping it, Chris and Rebecca, along with Alpha team members Jill Valentine and Barry Burton, headed up for the heliport after the Mansion's auto-destruct was activated. The creature would heal from its wounds and attack the surviving S.T.A.R.S. mercilessly. Luckily, Alpha team's pilot, Brad Vickers, flew over and dropped a Rocket launcher to be used on the monster. After the beast was eradicated by the explosive missile, the four escaped with Brad back home. Upon her return to civilization, Rebecca wrote a police report detailing Billy Coen's "death". After that she left Raccoon City before its demise. She was the sole survivor of the S.T.A.R.S. Bravo team after the Mansion Incident, and one of the four former S.T.A.R.S. members still alive (the others being Chris Redfield, Jill Valentine, and Barry Burton).

Some time after the bioterror attacks of 2013, Chambers had been researching in the cure of a new strain of virus developed by bioterrorist Glenn Arias, the research was conducted at the Alexander Institute of Biotechnology in Chicago. During the research, Maria Gomez attacked the facility, infecting all employees but Chambers thanks to her prototype vaccine. Redfield and his BSAA soldiers arrived just in time to save Chambers from the infected. Having learned that the mysterious virus strain bore similarities to the Las Plagas parasite used by Los Iluminados, Chambers accompanied Redfield to meet with DSO agent Leon Scott Kennedy, to enlist his help. Nadia & Damien asked why Chambers quit her Law Enforcement Career to become a scientist. Chambers replied that while Redfield fight bioterrorism with his muscle, she fight them with her knowledge.

Distraught at Redfield and Kennedy immediately quarreling upon their arrival, Chambers angrily chastised both men, revealing that the virus Arias used was already within the bodies of people everywhere and simply needed to be activated by an external trigger. Leaving behind a sample of her vaccinated blood and a laptop full of data on vaccine production, she left with disgust. It was at this time that Maria and Diego Gomez kidnapped her and took her to Arias' hideout.

Chambers awakens to be confronted by Arias having ordered her be taken alive. As the two talk, Chambers reveals all she has learned about the A-Virus which impressed her captor. Arias then reveals his motives for capturing Chambers as she resembled Arias's deceased bride-to-be, Sara. Arias attempts to put Sara's wedding band onto Chambers' hand, but her resistance leads him to decide that he will put Sara's arm on Chambers instead. Using Chambers' blood, a stronger strain of the A-Virus is conceived with Chambers involuntarily becoming the first test subject. She is told that she will have 20 minutes until the strain takes full effect and leaves her guarded as he makes his way to the roof.

Following an encounter with Redfield fighting Diego and a surgeon, Redfield saves Chambers, however with the A-Virus still in her system. The two then travel to the roof to confront Arias with Chambers' condition worsening by the second. Soon after the confrontation Chambers tells Redfield he must kill her as time is running short, but Redfield declined. Chambers looks onward at the fight as Kennedy, Redfield, and Redfield's unit, the Silver Dagger battles the Diego/Arias BOW hybrid. With the battle won thanks to everyone's combined efforts Redfield administers the cure to Chambers, saving her life. The three reflect on their survival of yet another horror as they release the cure into the air around the affected parts of New York. Chambers recalls the last time she and Redfield shared a helicopter ride together and how it all feels very similar to back then. 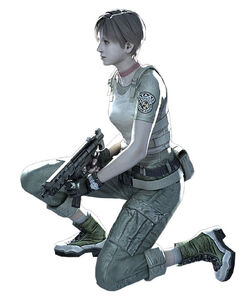 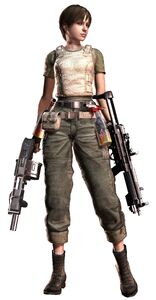 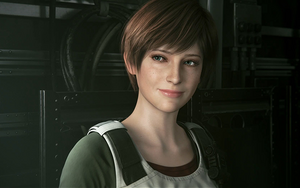