Heroes Wiki
Register
Don't have an account?
Sign In
Advertisement
in: The Jungle Book Heroes, Cartoon Heroes, Damsels,
and 29 more

Spending time with Molly
listening to the radio

Make Higher for Hire a success.

Be a good mama to Molly.

She is voiced by Sally Struthers.

Rebecca Cunningham is a strong independent woman who entered the business world to make some money. She is fairly responsible, often telling Baloo to be on time for his deliveries and to be more careful with the merchandise. She is very strict with Baloo and Kit especially since Baloo is a slob and she cannot stand slobs. However, deep down she truly cares for them to the point where, when Baloo was put up for ransom in "Save the Tiger", she sold her business Higher for Hire along with the sea duck to pay off his ransom, despite the business being extremely important to her. She even defended him against the insults of a bunch of potentially rich customers in "My Fair Baloo" when he saved them, telling them that while he was a slob he was better than all of them combined, showing she values her friendship with Baloo more than business and potential customers.

However, she is not without her faults. She places extreme importance on appearance as shown in "A Touch of Glass" where she kicked out a potential customer because he looked like a slob and smelled badly, though Baloo reprimanded her for this and informed her he was worth half a million and was extremely wealthy. However she refused to listen and when what appeared to be a wealthy couple came for a job, she didn't suspect them when they accused Louie of stealing their jewels and her purse (especially since Rebecca doesn't like Louie as she finds him a slob) when in reality the couple were scam artists. In "Gruel and Unusual Punishment", she insisted Baloo lose weight for a party they were going to attend and in "My Fair Baloo" asked him to touch up on his manners. This also coincides with her taste in men, as shown in "Molly Coddled" and "Her Chance to Dream" where in both cases she fell in love with who appeared to be gentlemen (though in the first case the guy was a fake who got close to her to get the statue her daughter Molly had while the second case the man loved her but was a ghost).

She can also be extremely stubborn. In "The Bigger They are The Louder They Oink", she refused to listen to Baloo when one of her money schemes nearly got them killed and she spent 250 on a wild pig who wouldn't listen to her to find truffles, unaware the natives would kill her. She finally admitted he was right but that she just couldn't accept it.

In fact, some of the main plots of the episodes focus on her money making schemes. Rebecca considers her business as a home and a living while often handling the business, advertising, client finding, and paperwork involved with the business. She also gets so busy that she neglects Molly at times like "Mommy for a Day" and "Shrinking Molly".

When Baloo failed to make payment on his loan for his Plane, the Sea Duck, and his agency "Baloo's Air Service", the Bank sold the deed to Rebecca Cunningham (fresh out of business school). The bank recommended Baloo as a great pilot, so Rebecca desired to keep him on as her company pilot. Of course all of this was hard for Baloo's pride to swallow, but after a harrowing run in with Don Karnage's Air Pirates and the nefarious industrial magnate, Shere Khan, Baloo softened to Becky's (she hates it when he calls her that) offer.

Rebecca renamed the service to "Higher for Hire" and has proven herself to be quite the savvy yet beautiful and ambitious business woman. She has a lot of business sense, cost cutting measures and all, and is always trying to come up with some new gimmick to attract business, some of which sometimes go wrong. Rebecca seems to be constantly lecturing Baloo about something (he's late, he's messy, he's lost the entire cargo).

Despite her stern demeanor, Rebecca is quite fond of Baloo and her other employees, Kit Cloudkicker, Baloo's navigator, and Wildcat, the agency's strange, but very gifted, mechanic. Subtlety betrays Rebecca in her affection for Kit, where she tends to treat him as though he were her own son (something Kit doesn't mind at all). 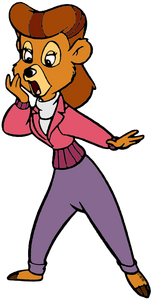 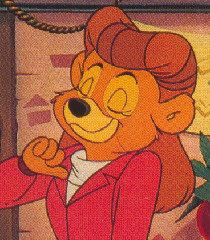 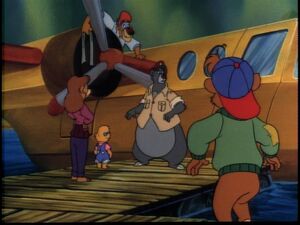