Arm Cannon
Enhanced Speed
Can travel to the Danger Zone

Hero from the Future

Red Action is a supporting character and heroine from the TV series OK K.O Let's Be Heroes!, she came from the future and is often seen around with Enid or K.O. As of the episode Red Action 3: Grudgement Day she is Enid’s girlfriend. She is voiced by Kali Hawk.

Red Action seems to be temperamental yet quite insecure about the time she is around, Overall she is playful, headstrong, stoick and some amicable towards Enid and K.O., However she seems to be regrethful about her accidentally destroying the prism crystal and appears to be fine staying in the past.

Red Action was part of a team of superheroes hailing from the future but after accidentally destroying the rainbow crystal, she exiled herself into the past in the year 201X, While living there she has acustoumed to her new life. 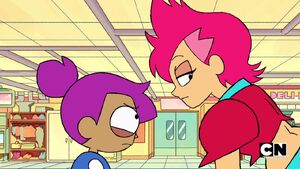 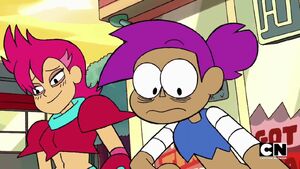 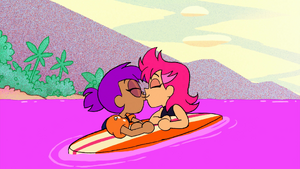