NOTE: This article is about the incarnation of Red Guardian from the Marvel Cinematic film series. The mainstream version can be found here: Red Guardian (Marvel).

Bring down the Red Room and free the Black Widows from their enslavement (succeeded).

He is former Soviet Armed Forces officer and a Russian super-soldier counterpart of Captain America, the ex-husband of Melina Vostokoff, and the adoptive father of Natasha Romanoff and Yelena Belova. Becoming a fake husband and father during an undercover operation in Ohio, Alexei would succeed in his mission before having to leave after being exposed by S.H.I.E.L.D. Upon his return, he had a falling out with General Dreykov, who sent him to a Russian gulag. In 2016, Alexei was freed by his adoptive daughters and assisted them in freeing the Black Widows from Dreykov's control.

He is portrayed by David Harbour, who portrays Jim Hopper in Stranger Things, and also played Hellboy in the titular 2019 film of the same name.

Alexei Alanovich Sostakov was born in the twentieth century in the Soviet Union, and was raised by his father, whom he had fond memories of when speaking of him. He once spoke of how his father took him on a fishing trip, and when he fell into the cold river, his father urinated on his hand to prevent frostbite.

At some point in his adulthood, Alexei joined the Soviet Armed Forces and became a candidate of the Soviet's super soldier program, which acted as away to compete to America's super soldier program that was developed in the 1940s. He became the "Red Guardian", which acted as the Soviet counterpart to Captain America during the Cold War, as he was given his own shield and was seen as the symbol of Russia. With his enhanced physiology, Alexei was sent on numerous missions and became beloved at home, gaining fans and loyal followers. During his time as an operative, Shostakov encountered Soviet general Dreykov, and became his right hand operative during the Cold War.

Around the 1990s, Dreykov became Alexei's handler, and would send him on missions to fight against the United States. In 1992, Dreykov assigned Shostakov to go undercover in the United States to infiltrate the North Institute in Ohio, which was actually a front by the organization S.H.I.E.L.D. Though reluctant to accept the mission, Alexei agreed and was assigned to act as a married man to fellow Soviet operative Malina Vostakoff, and the father to Natasha Romanoff and Yelena Belova, who were "black widows" in training. Living in Ohio for three years, Alexei and the group started to see each other as family, with Shostakov and Vostakoff developing feelings for each other.

In 1995, Alexei and Malina destroyed the North Institute, but they were exposed by S.H.I.E.L.D. since they were sleeper agents. Alexei and the group barley escaped from Ohio while evading S.H.I.E.L.D., and landed to Cuba where Alexei reunited with General Dreykov. Upon landing in Cuba, Alexei was separated from his "family", and he was sentenced to a Russian gulag after having a fallen out with Dreykov. While imprisoned, Alexei suffered from anguish and would reminisce about his glory days to his fellow inmates. Despite missing his days as the Red Guardian, Alexei would receive fan mail and bake goods from his fans, which acted as his only solace while in the gulag.

In 2016, Alexei was still a prisoner in the gulag until one day he received mail that had his action figure, which also had a communication device that allowed him to speak with Natasha. Though his adoptive daughter told him to not make a scene during the break out, Alexei decided to relieve his glory days by using his strength to fight off the prison guards. Reuniting with Natasha and Yelena, the two asked him if he knew the location of the Red Room, but he told them that he didn't know and also informed them that Dreykov sent him to the gulag. Alexei then told his adoptive children Melina's location in St. Petersburg, where they meet up with her and learn that she unknowingly created the brainwashing the Black Widows. When an argument ensued when Natasha said her family wasn't real and Yelena scolded her adoptive parents, Alexei comforted Melina and Yelena.

While consoling Yelena by singing her favorite song, the two were ambushed by the Black Widows and taken to the Red Room after being tranquilized. At the floating facility, Alexei was secured by Melina to enact her and Natasha's plan to free the Black Widows and Taskmaster's control from General Dreykov. Wanting to do more to make up for his past mistakes, Alexei proceeded to battle Taskmaster but was defeated, but Taskmaster and the Black Widows were freed from their control with the cure while General Dreykov was killed in his helicopter. Before Natasha left the scene since Thunderbolt Ross and his men were arriving, Alexei reconciled with her and remained with Melina, Yelena, and the Black Widows at the scene.

When becoming the Red Guardian, Alexei truly believed in the Soviet Union's ideology and believed himself to be a patriot. Due to his title as Russia's first super soldier, he comes off as attention seeking since he constantly speaks of his glory days and telling stories of fighting Captain America. Despite this, Alexei is compassionate and kind, which is demonstrated by his love for Melina, Natasha and Yelena. Once he realized of his past mistakes, Alexei decided to become more dedicated to his adoptive family, as shown by him assisting them in fighting against General D 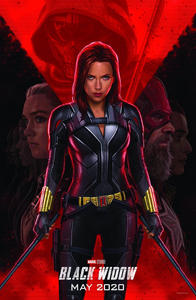 Red Guardian on the D23 poster. 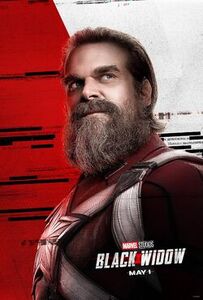