Superhero
Red Star (aka Leonid Konstantinovitch Kovar) is a Russian superhero in the DC Universe.

A former member of the Teen Titans, Red Star first appeared under the name Starfire in Teen Titans #18 (Dec. 1968) and was created by Len Wein and Marv Wolfman.

While still a young teenager, Leonid Kovar and his father were investigating an alien ship that had crashed in the Yenesi River; Leonid's father, Konstantin, was an archeologist.

While the two where investigating the ship, Leonid touched the controls in a certain way and the ship exploded. The explosion imbued Leonid with several super powers, including super strength, flight, speed, and pyrokinesis.

Leonid, being a patriotic Russian that believed in socialism, offered himself to Russia as their first super-hero. Leonid faithfully, loyally served the Communist party. He took on the name Starfire at first. However, a member of the Teen Titans had already chosen this name, so Leonid changed his name to Red Star.

Red's father died while working for the Soviet Union, so Russian scientist Pyotr Raskov looked after him until adulthood.

The Soviet Union attempted to keep his access to the western world limited, however Leonid eventually met the Teen Titans and began a friendship with some of its members. Kid Flash was generally distrustful of Leonid.

Leonid was arranged to marry his fiancee, Maladi, however before he could an insane criminal infected her with a deadly disease, making her a walking spreader of the disease. She was placed in the US, where she was constantly infecting more people with the disease, while the disease slowly battered her down. Red Star tracked her down to try to save her. At this time he came into conflict with the Teen Titans; he finally found Maladi but he was too late, and she finally succumbed to the disease. Coincidentally, she died on the day that their marriage was meant to take place. Soon after this event, Starfire (as he was called at the time) was re-named Red Star.

Later, Leonid met again with the Teen Titans, at S.T.A.R.S labs. At the same time, Hammer and Sickle of the Peoples' Heroes came looking for Leonid's blood. They were sent because of a desire for other countries not to study Red; they also did not want peace between the US and Russia, but rather war. Shocked at this betrayal of his country, Red teamed up with the Teen Titans and defeated the operatives. This left Red very conflicted inside, changing his beliefs and everything he was taught.

Red Star is empowered by unknown alien energies that have caused chain reactions within his molecular structure, altering his physical abilities and reflexes. Over time, these abilities have changed and he has developed from merely having augmented strength and speed to being equipped with an array of different powers.

Red Star's abilities include superhuman strength, speed, invulnerability, and endurance. Red Star can also morph into a form that is composed of fire-like energy that allows him to form and redirect energies as well. It seems his powers have the same effect on Kryptonians as his namesake, as he uses them against Superboy-Prime during the Sinestro Corps War.

Red Star is pale, with completely blank green eyes (a side effect of his powers) and blond hair (reddish in the Teen Titans show). In the Teen Titans TV series, he is seen with a green hoodie on, as well as black pants, a fatigue top, and a military uniform. In addition, he can change into an energy form that is composed of red, shimmering plasma.

Red Star is a very kind, selfless and humble person and is only seen to develop a temper toward the radioactive monster his energy leaks created, though naturally, he felt some anger on the inside for his life of being locked in his home, which is what formed the destructive instinct of this monster. Of course, these are both completely understandable.

Red Star’s gloved hand reaching down to pull Starfire out of the snow.

Red Star draping the unconscious Tamaranian over his shoulder

Red Star finding and saving Starfire in the blizzard 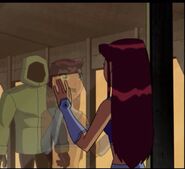