To be accepted (succeeded)

Constantinovitch Kovar, also known as Red Star, is one of the many heroes of the show Teen Titans. Red Star features prominently in the 2003 Teen Titans episode, Snowblind.

He was voiced by Jason Marsden who later played Thackery Binx from Hocus Pocus, Max Goof from A Goofy Movie, Kovu from The Lion King II: Simba's Pride and Felix Renton from Kim Possible.

Red Star is pale, with completely blank green eyes (a side effect of his powers) and reddish hair. He is seen with a green hoodie on, as well as black pants, a fatigue top, and a military uniform. In addition, he can change into an energy form that is composed of red, shimmering plasma.

Red Star is a very kind, selfless and humble person and is only seen to develop a temper toward the radioactive monster his energy leaks created, though naturally, he felt some anger on the inside for his life of being locked in his home, which is what formed the destructive instinct of this monster. Of course, these are both completely understandable.

Red Star was formerly a young recruit in the Russian armed forces. Originally frail and weak, his strength and muscular physique were bestowed to him in a government experiment for creating super-soldiers, but his powers were fueled by intense and dangerous radiation, which would sometimes go berserk under emotional stress. For this reason Red Star had been living in voluntary exile in an abandoned Siberian nuclear power plant, where he used the facilities to funnel his excess radiation into water capsules whenever his frustration and, therefore, the energy would build up too much. A leakage in the containment unit made the radiation melt up the snow outside, which seeped into a pond and eventually created a plasma monster which wreaked havoc on the surrounding settlements, acting out Red Star's latent resentments. Red Star got blamed for the creature's actions, partly because of the destruction he had inadvertently caused when his powers went berserk the first time.

In response to the damage the plasma creature was causing, the Teen Titans began pursuing it. After chasing it into a snowstorm, Starfire succumbed to the temperature extremes but was found by Red Star before she froze to death. Encouraged by Starfire to embrace his power instead of fighting it back, Red Star joined the Titans, fought the creature and destroyed it by pumping it full with an overdose of radioactive energy. However, the energy within his body thus rose to uncontrollable levels, and he asked Starfire to take him into space, where his power was released in a gigantic explosion. Before his departure, however, the Titans made Red Star an honorary member, and his fellow people, who have previously shunned and feared him, now viewed him as a hero.

Red Star made a minor cameo in Lightspeed. The H.I.V.E. Five were stopped by an unknown speedster when they were trying to rob a museum. Back at their base, Jinx and Gizmo were scrolling through Honorary Titans, trying to make a match. Red Star was the last Titan depicted on the screen.

Red Star inexplicably reappeared alongside Starfire and Bumblebee in the headquarters of the Brotherhood of Evil to help the Titans fight the assembled supervillains. His reappearance remains unexplained, although in "Snowblind" it was hinted that the explosion was a catalyst to his gaining full control of his powers. He was seen slamming Mammoth into a wall and battling Steamroller. After their victory, Red Star socialized with the other Titans in Titans Tower and participated in the recapture of Doctor Light.

Red Star's primary powers intended to be bestowed upon him by the experiment were superhuman strength and endurance & resistance to damage. In addition, the physical changes enable him to withstand environmental extremes, including the hostile conditions in deep space and, naturally, radiation, similarly to Starfire.

Red Star's power also encompass the generation of immense radioactive energy, an accidental side effect of the experiment, which he initially found too uncontrollable to use, and released it as energy explosions. After he had come to accept his power, he could utilize it to fly and fire highly damaging energy blasts.

Also, note that Red Star has built many snowmobiles, making the viewer infer that he must have some degree in technology of vehicles.

After rescuing Starfire from dying in a blizzard, Red Star got around to telling her how he got his powers and why he was shunned by his people. After hearing his story and getting to know him, Starfire encouraged him to accept his powers and to use it for the good of other people. At first, Red Star did not think he could accomplish this; however, Starfire did not give up on him, which gave him the motivation he needed. After destroying the radiation monster, Red Star maintained the confidence Starfire had given him.

Red Star carrying an unconscious Starfire over his shoulder

A frail Red Star, before he acquired his powers.

Red Star pulling a fainted Starfire out of the snow.

Draping Starfire over his shoulder

Starfire being carried off by the hood-covered Red Star 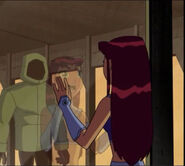 Greeting Starfire in his home