Red Tornado is an android and one of the comic book heroes in the DC Comic book series, Justice League of America. He has also made many appearance in various DC animated series such as Justice League, Justice League Unlimited, Batman: Brave and the Bold, Young Justice, etc. He is a Mega Hero who has control over wind which enables him to make tornadoes, red-colored ones, courtisy of his alias.

He was created by Gardner Fox and Dick Dillin, and first appeared in Justice League of America #64 in August of 1968.

Red Tornado was an android with wind-creating powers. He first appeared in Justice League of America #64-65 (August–September, 1968).

The android was created by the mad scientist T.O.Morrow to infiltrate the Justice Society and destroy it from within, pretending to be the original Red Tornado suffering from amnesia. Despite realizing that could not be true (because they knew the facts about the original Tornado- obviously Morrow didn't) the Society allowed him to join them. Eventually The Tornado discovers the truth and turns on his own creator, saving the Society and becoming a true hero.

Later, the Tornado joined the Justice League and gained his own secret identity ("John Smith"—he didn't have much imagination), a human girlfriend, and even adopted a little girl orphaned in a Middle Eastern war. Although often given a robotic personality in other mediums, the Tornado in the comics had human emotions and spoke normally, though he did angst about "not being human enough."

He also spent some time as the "adult mentor" of Young Justice.

In the beginning there were two tornado entities that originated from the planet Rann in the Earth One universe, which were the good and evil personalities of the air elemental, Ulthoon. The air elemental confronted Rann's adopted champion, Adam Strange, and was defeated by him, and with the help of the Justice League. Following defeat, Ulthoon contemplated the nature of good andevil, and decided that good was a superior force.

The champion came upon the criminal T.O. Morrow, who was creating an android that could infiltrate and defeat the Justice Society. When the Tornado Champion learned that the android was called "Red Tornado", and decided to assume control of the android and become a hero. The champion merged with the android, but its memory was erased, awakening as the Red Tornado. Believing itself to be the original Justice Society associate by the same name, Red Tornado visited their headquarters and announced its return to active duty.

The JSA didn't recognize the android, but allowed the Red Tornado to accompany them to prevent a theft at a nearby museum. Through a series of mishaps choreographed by Morrow, Red Tornado seemingly killed the JSA, and the android then tracked Morrow and seemingly defeated him. When the remaining JSA members arrived to investigate, a booby trapped weapon fell on them, and Morrow traveled to Earth One. On that Earth, Morrow discovered that he defeated the JLA as he had the JSA before them, and Red Tornado recovered and revived the JLA. Red Tornado and the Justice League then defeated Morrow, and uncovered a method to revive the JSA back on Earth Two. Morrow admitted that Red Tornado was his android construct, but the Justice Society decided to make him a member. 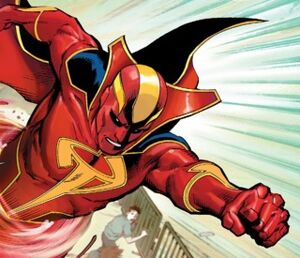 Red Tornado with the Justice League. 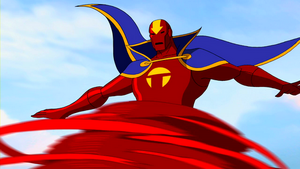 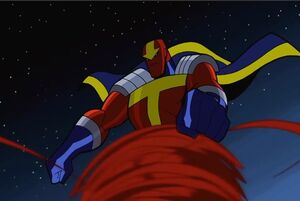 Red Tornado in Batman: The Brave and the Bold 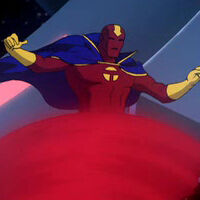 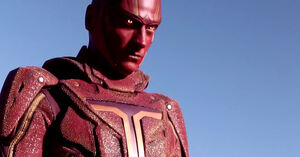