Steal as much as he can

Red X is an anti-hero and a former "villain identity" employed by Robin. Although he never appeared in the Mainstream DCU, he was Robin's rival and Archenemy in the Teen Titans TV series, and made reappearances in the Titans Go! comic based on the series. He was voiced by Scott Menville, who also voiced Robin, Nightwing, and Witch in the same franchise.

Red X was originally a villainous cover identity Robin had conceived for an attempt to get closer to Slade. Mystified by the enigma the shady villain presented, Robin approached Professor Chang for the necessary items - particularly Xenothium for a power source - to create the Red X suit, and posing as a superpowered master thief, Robin stole several computer chips Slade was after and offered them with a proposition to enter a partnership.

However, Robin's haste in trying to get too close exposed his identity to Slade, and in fear that if he told his teammates about his plans, they wouldn't play their parts convincingly, he chose not to tell them. But the plan went awry; Slade revealed his knowledge of Robin's identity, and while Robin managed to retrieve the chips, Slade managed to elude him yet again. Robin was back at square one, with one additional step backwards: he had lost the trust of his friends.

Since the Xenothium power core could not be disposed safely, Robin stored the suit inside a vault in Titans Tower, never to be used again.

Some time later, however, the suit came into the possession of an unknown culprit who intended to use it for his own financial gain. Because the Xenothium supply in the suit's power belt was nearly exhausted, Red X stole a scanner which could locate the substance. Not knowing where to look for him, Robin coerced Professor Chang into revealing the most likely location where Red X could get his hands on more Xenothium: a highly secured tech company at the city's south end. Red X managed to penetrate the facility, with the Teen Titans in pursuit - but Professor Chang's henchmen were following them; Chang intended to swipe the Xenothium for his own to power a gigantic disintegrator cannon of his own construction. In order to ensure no interference from Robin, he captured the other Titans and held them hostage.

Robin confronted Red X about his self-serving attitudes, while Red X kept taunting Robin about the one mistake which helped create him. Unimpressed and willing to make amends, Robin went after Chang himself, but almost ended up his victim as well. At the last moment, Red X saved Robin from certain death and aided him in freeing his teammates and bringing down Chang. When the Titans intended to do the same with him, he escaped by detonating a tube of Xenothium at their feet, though he had to leave his power belt in Robin's hands.

Later on, Red X was seen as a recruit among the ranks of the Brotherhood of Evil. With his power belt replaced, he participated in a race initiated by Ding Dong Daddy for Robin's most prized possession, in order to sell it to the highest bidder. A bomb dropped by Daddy blew him off the road, but he was saved by Robin at the last instant. Because of this, and because he realized how desperate Robin was, Red X attacked the other villains participating in the race, thoroughly disabling their vehicles. His last target was a bus driven by Raven and Starfire, from which he withheld; he told the two girls "Tell Robin we're even ... for now", and disappeared.

Red X briefly in the final confrontation with the Brotherhood, before changing sides to aid the Titans to serve his own needs, and later disappeared afterward, implying he quit both teams. His current whereabouts and activities are unknown.

Red X is quite the enigma. He does have similarities to Robin (the first X), they are both extremely trained martial artists who can easily overpower even more experienced foes however the major difference is that underneath the Red X mask Robin's obsession over bringing Slade to justice was amplified even more and he became twice as serious and stoic, this X possesses a sense of humor, normally making sharp quips during a battle. For some reason Red X took pleasure in antagonizing Robin such as calling him "kid" and even flirting with his crush, Starfire.

Despite this Red X had no interest in playing the "supervillain" instead he was simply a thief who only wanted to look out for himself. Robin labelled him as being selfish and did not have the capacity to care about another person. Despite not either wanting to be a villain nor a hero, Red X did display moments of heroism, such as saving Robin from falling to his death and helping him in a race to recollect his stolen briefcase despite initially competing for the case himself. After this, Red X was classed into "Anti-hero" as while he mostly revels himself, there are occasions when he is actually good.

Ever since his release Red X has met acclaim with his fans. Many people love him for his dubious morality, enigmatic side and character development, making him one of the most popular characters on the show, to date. 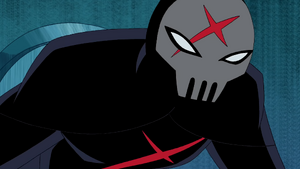 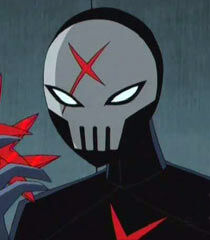 Red X getting ready to fight