Reggie
Reggie "I Love Me" Mantle

Be with Veronica
Outdo Jughead in pranks and schemes

Reggie Mantle is the tritagonist of the Archie comic series. He is Archie Andrews's rival for the affections of Veronica Lodge and is also a member of Archie's rock band The Archies, playing bass guitar for the group.

He is usually considered the main villain most of the time, due to him being the absolute moral opposite of Archie Andrews. He is vain, known for having a comb and mirror on him at all times, but is positives lie in his athleticism.

The character was created by Bob Montana and John L. Goldwater.

The live-action version of Reggie was portrayed by Ross Butler in the first season in Riverdale until Charles Melton took over the part for the rest of the series. 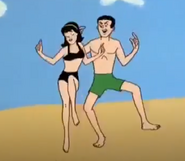