Ally of the Akomish Tribe

Try to turn his brother back to Normal (failed)


Save Delsin, Fetch, and Eugene from Augustine and Hank (succeeded)
Help Delsin get Augustine's power to get the concrete out of the Akomish Tribe (succeeded posthumously)

Reggie Rowe is the deuteragonist in inFamous: Second Son, he was Delsin's older brother and Sheriff of Salmon Bay, where the Akomish tribe lives. He acted as a moral compass for Delsin, and frequently arrested and presumably bailed him for misdemeanor vandalism with his artwork. He has shown some distaste for his brother's newfound abilities, but still acknowledges his brother as a human being. Nevertheless, he does not show this consideration to other Conduits, namely Abigail "Fetch" Walker, and continues to see them as "Bioterrorists".

He is voiced by Travis Willingham, who also voiced Shane in InFamous: First Light, Roy Mustang in Fullmetal Alchemist, Portgas D. Ace in One Piece, Guile in Street Fighter, Evan Bernard in Time Crisis 4, Knuckles in Sonic the Hedgehog and sonic boom, King Roland II in Sofia the First, and Cannonbolt in Ben 10 (2016).

After their parents' death, Reggie tries to keep Delsin from causing trouble and going astray, and acts as surrogate father to his brother. One day while on patrol (presumably) recently promoted Reggie arrives in his truck after Delsin tagged his Congratulations to Sheriff billboard and jumped down into Betty's warehouse, where she lets Delsin leave, so he can try to get to the Longhouse, but Reggie beats him there and once again scolds Delsin for embarrassingly making him have to arrest him again, however a US Army truck crashes in the Akomish village during their conversation. Two Conduits (Abigail Walker and Eugene Sims) start to make their escape, so Reggie goes after them, and tells Delsin to stay where he is, but Delsin disobeys and goes and helps a "Bioterrorist" known as Hank to his feet. When Reggie returns, Hank grabs Delsin and holds him hostage. Reggie threatens to shoot him if he does not let him go, only for Hank to use his power to manipulate smoke against him. Delsin grabs Hank in an attempt to free himself, only to unknowingly absorb his powers, causing an explosion.

Reggie proceeds to follow Hank, only for Hank to subdue him by throwing a car on top of him. Delsin arrives and using his new abilities frantically throws the car off of him. Delsin panics about being a Conduit, but Reggie calms him down and tells him they will find a cure for him. Upon hearing sounds of an explosion, Reggie asks Delsin to come with him, but not to use his newly absorbed powers. When they come up to Betty's warehouse, the gate is locked, leaving Delsin no choice but to go through with his smoke powers and scaring other members of the tribe. Reggie leaves to try and convince them that Delsin is merely just having smoke come out of his fingers, but fails.

After Delsin wakes up and they start to head for Seattle, Reggie hears a bus load of people asking for help. After Delsin clears the road of the concrete, Reggie calls him and says he can't let him on the bus because the passengers saw him using his Conduit abilities, and are afraid of him. After dropping off the passengers, Reggie tries to go back for Delsin, but the 520 bridge he crossed was set to be decommissioned, causing Reggie to have to cling onto the side of the riverbank for dear life until Delsin arrives and helps him up. As they look on the decommissioned bridge, Reggie asks Delsin if he is getting used to his new symptoms, but he couldn't find the right answer. At the checkpoint into Seattle, Reggie tells the DUP guards he is a police officer before they soon discover Delsin is a Bioterrorist when the scanner read his fingerprint. Reggie pushes a guard down just as they realize their cover has been blown. Upon seeing some guards with Concrete abilities, Reggie tells Delsin to absorb the power from one and they could go home, but since they were only forced Conduits, Delsin doesn't receive it and informs Reggie while climbing the Space Needle.

After Delsin makes his own tag on a DUP flag, Reggie informs Delsin to be careful for a sniper that is murdering people. When Delsin takes a photo of one of the victims, Reggie discovers the victim was a drug dealer and Delsin finds the sniper's perch. Inside. Delsin finds woman's clothing, boots and a book called "Jane Eyre", revealing the sniper is a woman. He also finds a neon drawing of a man, named Brent. Reggie informs Delsin "Brent" is Brent Walker, one arrest for drugs and was found dead with an unknown stab wound. Upon confronting the sniper, who was Abigail Walker, Delsin absorbs her power and they fight in a neon light factory, before Delsin soon sees Abigail's flashbacks. Reggie soon comes in and helps Delsin up, while figuring what to do with Abigail. He soon decided to put her in a cage, but Delsin tells him that she will be his responsibility. Evil Karma: Delsin grabs Reggie's wrist as he holds Abigail and moves him away from her.

When Delsin manages to get to the Lantern District and finds suspected Conduits being taken, Reggie comes up with an idea and changes into one of the DUP's yellow vests that they use to identify suspected Conduits, so he can attract an Angel to fly him to the location while Delsin tracks his phone. After Delsin finds Reggie by the entrance of the Conduit summoning Angels, Reggie walks away to get out of the vest while Delsin confronts the Conduit. After Delsin absorbs the power of the angel Conduit, who was Eugene Sims, Reggie comes in and picks up Eugene, threatening to throw him in a cage, but Delsin tells him that he and Eugene need to talk alone and thanks him for his help on looking for Eugene, before remembering he already did, to which Reggie replies that it "wasn't funny the first time".

Reggie decides to help Delsin out to save Abigail and Eugene, for the first time referring to them as "people", instead of the usual "Bioterrorists" or Conduits. Although Reggie doesn't trust Hank, he goes to Concrete Island via boat to help Delsin fight Augustine. As soon as he gets the concrete cuffs off his brother, he assists Delsin in freeing Abigail and Eugene from a concrete cage. However, Augustine throws a monkey wrench into their efforts: she encases Reggie's legs in concrete, and proceeds to drop the concrete cage near Delsin and his brother. This leaves the two dangling from the edge of the platform.

As Reggie holds onto Delsin, who is keeping the both of them from falling into the icy water, he realizes that the concrete is expanding across his body. He tells his brother to let him go, as the concrete would reach and encase him too. Accepting his inevitable fate, he tells Delsin, "Dammit, I'm so proud of you. Always have been. I love you bro". Despite his brother's protests, Reggie then lets go. Delsin screams in anguish as he watches his brother fall to a watery grave. Distraught, Delsin attacks Augustine, and the ensuing battle destroys the island.

After healing the wounded Akomish tribe members from Augustine's concrete power, Delsin tags a memorial billboard in memory of Reggie. When Betty asks about Reggie, Delsin admits that he saved his life.

When Delsin returns to the tribe to heal them, Betty states that Delsin is no longer Akomish and has disgraced his ancestors and the memory of Reggie, enraging Delsin and causing him to perform an Orbital Drop, which destroys the Akomish Reserve. 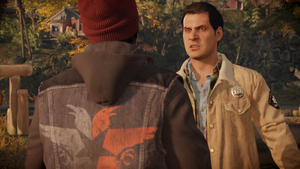 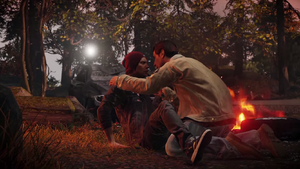 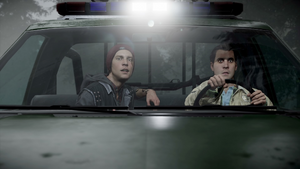 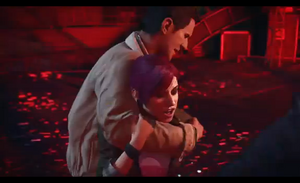 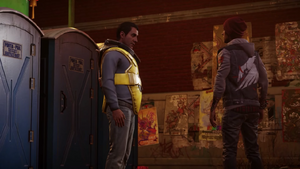 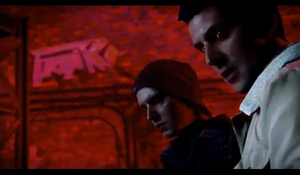 Retrieved from "https://hero.fandom.com/wiki/Reggie_Rowe?oldid=2153420"
Community content is available under CC-BY-SA unless otherwise noted.