Blader, Leader of the White Tigers

To become Beyblade World Champion, To be the strongest Beyblader in the world.

Strict, Calm Hero, Serious
Rei Kon (Raymond "Ray" Kon in the English dub) is a character from the anime and manga series Beyblade. He is a member of the Bladebreakers and his Beyblade is Driger. Ray was calm and open minded. In fact, many comparatives can be made between his personality and yin and yang, which he appropriately wears the symbol of, the Taijitu. The forces of yin and yang are generally described as "opposite but complementary" forces, and the same can be said about him.

Rei is generally depicted as calm and open-minded. In fact, many comparatives can be made between his personality and Yin and Yang, which he appropriately wears the symbol of, the Taijitu. The forces of yin and yang are generally described as opposite but complementary forces, and the same can be said about him. He can be calm and collected, but also a fierce competitor. These two qualities can be referred to as opposites, but they are not absolute in their differences, and the same can be said about Yin and Yang. Furthermore, the forces of yin and yang are interdependent, meaning that they cannot exist without their counterpart. This can also be compared to Rei's personality. His whole nature seems to be similar in principal to this metaphysical concept.

Takao Kinomiya: Despite being on the same team, their relationship can get quite rocky and at times both have different points of view. There are even instances when they beyblade against each other to prove their point. Despite this they always seem to find one way or another to resolve the matter and become friends again.

Kai Hiwatari: Rei and Kai are closest in age of the Bladebreakers and are shown to share a certain respect, concern and admiration between themselves and are the most similar of the 4 bladebreakers.  This becomes particularly evident in Beyblade V-Force.

Max Mizuhara: Rei and Max seem to get along fairly well, especially in G-revolution when they seem to share an understanding about wanting to defeat Takao, they are also seen training with each other often. They seem to be the most level headed two of the blade breakers

Manabu Saien (the Chief):  Rei and the Chief seem to have an intial bond as the Chief has with the rest of the Blade Breakers, even battling Kiki to try and get his disk back.

Chen Mao: Rei and Mao were born and raised in the same mountain village in China, and grew up together alongside Gaou, Kiki and Rao, becoming life-long friends. It was from Rei that Mao first learned how to beyblade, and as time went on, their loyalty to each other led to early stages of friendship. However, this was dashed by Rei's desertion. Mao however refused to believe Rei was a traitor and her feelings for him were still there. Kai seems to believe Rei returns these feelings as he remarks that he should not let his feelings for Mao stand in the way during there first offical battle and that "how can we be sure that Rei won’t forget whose side he’s on when Mariah gazes into his eyes?" . Afterwards the White Tigers reconcile with Rei, he also later rejoins them in Beyblade G-Revolution. Their friendship becomes even stronger.

Chen Mao: Mao becomes Rei's wife in the manga and the two have a daughter named Rin.

Stan Kon: Rei's uncle and only known blood relative. He works in a Chinese restaurant in France, run by Oliver Polanski's dad.

Rei has long black hair that is bound in a white wrap, golden eyes with cat-like pupils and wears Hong Kong-styled clothing. In V-Force, Rei's appearance seems to have changed a bit. His eyes change from gold to copper. His muscles are also more defined and slender. In G-Revolution, Rei's eyes revert to their golden color, and he seems to be more "cat-ish" than in the previous two seasons. He has a flexible, lean build - the results of his intense training with White Tigers. In  beyblade the movie - fierce battle, Ray is taunted for dressing "like a waiter".

Throughout the first season, Rei is looked to for advice about battles. He is generally revered as a kind hearted, polite individual, who is very welcoming when meeting new people. He is also shown as being very open minded, especially about beyblading techniques. This is emphasized in the Asian tournament, used by him as a means to justify his leaving of his home village. In the battle against Mao in the Asian tournament he is torn between the loyalty to his new team and his former one. After the battle between Takao and Rao, Ray chooses to fight once again in order to settle the score once and for all, the battle between him and Rei is furious but Ray prevails as the victor and issues between him and his former team are resolved. It is also shown in this season that he has an uncle who is the head chef at a restaurant in Paris, which is owned by Oliver's Dad. It is also shown that he works as a waiter in a restaurant in Hong Kong for extra cash. This has led to an opinion of him loving to cook. In the Russian Tournament, Rei faces his most brutal confrontation yet being inflicted with many injuries by Boris's blade, getting attacked directly by Boris' Bit-Beast Falborg. Luckily, Driger manages to save Rei, and defeat Boris. However, after the battle, Driger vanished and Rei had to be sent to the hospital because of his injuries. Soon, Driger returns to him. In the anime, Rei is first introduced during the Regional BBA Qualifier before his match with Takao. At that time, he is portrayed as a powerful and confident competitor. However, some may say that he is shown as overconfident in some aspects, especially before the battle against Tyson had even begun. In the first battle, Ray easily, and almost effortlessly destroys Tyson's Blade using his Bit-Beast  Driger's Tiger Claw attack. In the following battle, Rei becomes somewhat cocky about his ability, and ends up losing the second round to Takao. Ray forfeits the final, deciding battle, saying that he had no more to prove. After the final round of the Tournament, between Takao and Kai, Ray approaches Tyson, along with Max and Mr. Dickenson, inviting him and Kai to join the new team called the Bladebreakers.

Rei's Beyblades in this season were Driger Slash & Driger Fang.

Generally, Rei is shown in a similar light as to how he is portrayed in the first season but now he is much more critical of his performance

Rei uses three Beyblades in this season: Driger Fang, Driger Vulcan, and Driger Vulcan 2.A good example of Ray's kind hearted nature is shown in V-Force, in the battle against Salima and Cyber Driger. During this battle, Salima becomes somewhat hypocritical towards her original philosophies towards beyblading. Because of this, Rei spends most of the battle trying to convince her that using Cyber Driger has tainted her beliefs. In a battle against Dunga he loses Driger for the second time causing him to worry and lose his self confidence. When the group faces off against the Saint Shields for the last time, Rei aids Kai in his battle against Dunga after Joseph joined the fray. Despite an audacious battle, Rei successfully reclaims Driger.

In this series, Rei is portrayed in a very different way from the other two seasons. In the previous two, he was shown as being a polite young man, but not having confidence in his beyblading ability. In G-Revolution however, he is shown as being confident, almost to the point of being cocky. It is this that causes him to lose some of his matches- however he does justifiy this with his frustration over his corcern that he is not good enough to fight Takao. During this series, he leaves the Bladebreakers to help form the White Tiger X team, partnering up with his former teammates: Rao, Mao, Kiki and Gaou.

Rei's Beyblade is enchanted by the Bit-Beast Driger—a sacred white tiger spirit worshipped by the White Tiger Tribe ("Fang Tribe" in the manga series). Rei is the one of a long line of guardian whose passion for Beyblades deemed him worty to possess and guard over Driger. With its power, Rei develops a battle style which emphasizes swifness and accuracy, inventing special moves such the Tiger Claw, Tiger Fang,Vulcan Claw, Gatling Claw (Maximum), and theThunder Slash. 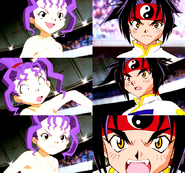 Rei, Max, Takao & the Chief try to avoid the lasers.

Rei and Mao playing together as kids

Ray teaching Mao about Beyblades when they were kids
Add a photo to this gallery
Retrieved from "https://hero.fandom.com/wiki/Rei_Kon?oldid=1898491"
Community content is available under CC-BY-SA unless otherwise noted.