Agent of the International Secret Police

Protect Toha and the Pako.

Ninja
Rei Yagyu is an agent for the International Secret Police capable of transforming into Valorous Ninja Reiha and one of the main protagonists of Sekai Ninja Sen Jiraiya.

She is portrayed by Tomoko Taya.

A mysterious kunoichi descended from the Shadow Yagyu clan who has been entrusted to protect Toha. She holds a secret power which she releases when her pupils glow green. Like Toha, she is descended from the alien that brought Pako to Earth, thus she is the only person whose blood type is compatible with Toha's. In Episode 11 she overuses her power and suffers a memory loss as a result, but she eventually recovers by Episode 24. She specializes in swimming and gymnastics due to her high physical strength and flexibility. 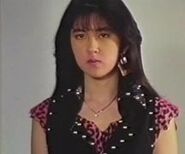 Add a photo to this gallery
Retrieved from "https://hero.fandom.com/wiki/Rei_Yagyu?oldid=2210715"
Community content is available under CC-BY-SA unless otherwise noted.