Hinoe, Misuzu, Madara and other youkais

She is Takashi Natsume's maternal grandmother and the person whom Natsume inherited his strong spiritual power from.

She is voiced by Sanae Kobayashi, who also voice Alexis Rhodes from Yu-Gi-Oh! GX.

Reiko physically resembled her grandson with long, dusty-blonde hair, amber eyes, and she usually carried a slight smile, just like Takashi. It is because of their similar appearances that youkai often mistake Takashi for Reiko. She has been noted to be quite beautiful by both youkai and humans. Her hair goes to her bust-level, and it seems to be usually unkempt.

In the anime and manga, she is usually only seen in flashbacks wearing her school uniform, sometimes torn. She also had a bruise on her cheek at least once because human children have thrown rocks at her.

Reiko was despised by both humans and youkai. She was a bully towards humans and ayakashi alike, resulting in her being socially isolated. She defeated many Youkai and made them write out their names in the Yuujinchou (literally Book of Friends), making them "servants" to her.

Although initially her actions were presented as a desire to have control over the youkai, over the course of the series it is revealed that they were done more out of loneliness and longing for companionship. She died young, with no human willing to remember her and many youkai mistaking her grandson as her. Reiko had bad table manners; in one case her table manners resulted Tsuyukami's and Susugi's pages stuck to each other in the Book of Friends.

She was also very forgetful, seen throughout the series, forgetting to meet up with youkai who were anticipating her return.

Although some of the youkai she "enslaved" or made plans with grew to despise her, some youkai (like Santou) continued to wait for her.

Reiko had strong spiritual power, enabling her to see youkai. Due to this ability, she was shunned by humans. She found partial comfort amongst youkai. She would take out her frustration on the youkai by bullying, teasing, and challenging them to matches.

From then on until her death, she would be with youkai more often than humans. She would challenge youkai to a fight any time she encountered them, and have them write their name down if they lost.

She had a good relationship with some yokai, but others were forgotten. She would either forget about the youkai whose names were in the Book of Friends, or events she had made plans for.

This led in to her grandson tying up all the loose ends she left for him. She was well known for making the Book of Friends, the book that many powerful youkai wanted for themselves.

Her relationship with Madara is not yet revealed, only to be hinted as intimate. Madara can imitate Reiko, not only her physical form, but also her habits and manners. He himself states that other than Natsume Takashi, she is the only person Madara has "taken a good look upon", which indicates that they were at least as close as Nyanko-sensei and Natsume Takashi.

In Chapter 57, it was revealed that she was never married, and had a child (Takashi's mother) without marrying. The father of her child has not yet been revealed.

The details on her death is not known, and has not been mentioned yet in the series. However, Takashi said in his conversation with Nanase that Reiko died under a tree somewhere. 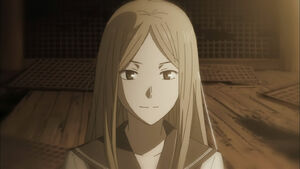 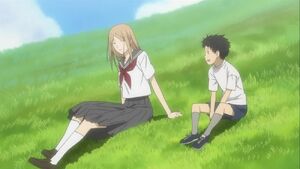 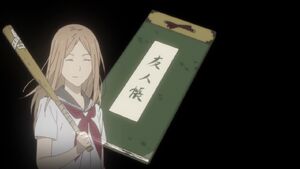 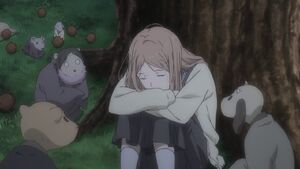 Add a photo to this gallery
Retrieved from "https://hero.fandom.com/wiki/Reiko_Natsume?oldid=1698120"
Community content is available under CC-BY-SA unless otherwise noted.