Obsessing over spirits and zombies.

Reiko Yanagi, or known by her Hero name Emily, is a minor supporting character in the manga/anime My Hero Academia. She is a member of Class 1B and is almost the say to considered silent like Yui Kodai, except she's more of a fan of scary stories online.

She is voiced by Ayane Sakura in the Japanese version (who also voiced Ochaco Uraraka) and Ryan Reynolds in the English version.

Just like Yui Kodai in some ways, Reiko is naturally silent and often can be seemed shy with an odd body posture of her hands dangled and elbows sided. As emotionless as she seemed to be, doesn't mean she has some regarded hobbies she does when it comes to reading creepypastas on the internet during her spare time. 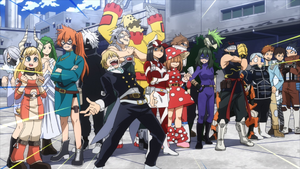 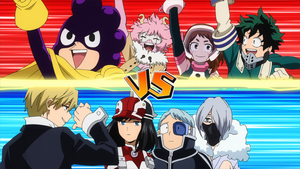 Retrieved from "https://hero.fandom.com/wiki/Reiko_Yanagi?oldid=2296087"
Community content is available under CC-BY-SA unless otherwise noted.