Marry Subaru and have a family (ongoing).

Rem is one of the twin maids working for Roswaal L. Mathers in the latter's mansion. Rem is the twin sister of Ram. Currently, Rem's name and memories were eaten by Lye Batenkaitos (Sin Archbishop of Gluttony), rendering her in a comatose state.

Rem was identical to Ram in every aspect, with the exception of her eyes, the color of her hair, and the size of her breasts. Her blue hair was cut into a short bob and parted to fall over her right eye, as opposed to Ram whose hair fell over her left eye. Her large light-blue eyes, pink lips, and soft skin gave Rem a youthful loveliness that Subaru Natsuki found both beautiful and adorable when he first saw her. Rem noticeably had a larger breast size than her younger sister. As previously mentioned, Rem's eyes were different to Ram's, as the elder sister's were slightly more slanted. Her delicate frame featured narrow shoulders and stood at one-hundred and fifty-hours centimeters tall (or five foot one).

Most of the time, Rem wore a uniform issued to her as part of her job in Roswaal's mansion. This maid outfit consisted of a short black dress with white flowery accents, a white apron, white thigh-high socks, black shoes, and a white-and-black flowery headpiece. The outfit exposed Rem's shoulders and flaunted her body line in a provocative way, leading Natsuki to believe the designer's intentions weren't entirely pure. Positioned on the left side of her head, Rem had a purple hair-clip and a flower-shaped ribbon of the same color.

Rem tends to speak in a superficially polite manner and sometimes acts without thinking. She holds both respect to the point of worship and guilt toward her sister for an incident in the past.

Because of her respect and guilt toward her sister, she used to think of herself as inferior. After Subaru saves her, she falls deeply in love with him, becoming one of his most loyal followers. Rem will stick with him no matter what happens, even if Subaru rejects himself.

In her Oni Form state: Rem's personality drastically changes and becomes that of a mindless killing machine, murdering all without any form of hesitation and can even attack her own allies. Due to its violent nature, she only uses this ability with extreme caution.

Rem has lived with her parents and twin sister in an Oni village.

However, the village was attacked by the Witch Cult 10 years before the start of the series, her sister's horn being cut off by Faust.

The whole village got burned and destroyed, her parents and the citizens were killed, while her and sister were the only survivors.

Ever since, Rem devoloped a strong inferiority complex due to a sense of guilt for her sister's injury, so she made the upmost effort to become as ideal a servant as possible. But even having reached a certain level of perfection, she still has a low level of self-esteem and continues to idolize Ram.

Demon Physiology: As a demon, Rem, like the rest of her race, had physical attributes that surpassed regular humans. She was capable of killing mabeasts with her bare fists and showed no strain carrying Subaru. Demons were also capable of manifesting a pair of pink energy-like long-curved horns out of their foreheads. While manifesting the horn, vibrant pink energy would exude from Rem's forehead. Despite appearing like energy, the horn still acted like a physical part of the body, as Ram's was sliced off by a dagger. While manifested, a demons' horns would awaken a demon's instincts and act as a gate that allowed the demon to absorb mana from the atmosphere, significantly increasing its ferocity and physical strength. If a demon over-exerted itself while manifesting its horns, it was likely that the recoil would render them weak. It was also possible for a demon to lose control of themselves, blindly attacking those in their way whether they were allies or enemies. As a twin, Rem was born with a single horn that appeared smaller than an average demon's, meaning her power in her demon state was lower than her kin's.

Water Magic: In the fantasy world, individuals were capable of manipulating magical energy because of a "gate" that existed within every person's body. This gate would draw mana into a body as well as expel it out, functioning as a kind of faucet for magical energy. Each person possessed a different elemental attribute that allowed them to produce magical spells related to that element. Of the six elements, Rem's designated element was water, one of the four common attributes. Lord Roswaal mentioned that Rem's skill with water magic was above average but nothing exceptional. 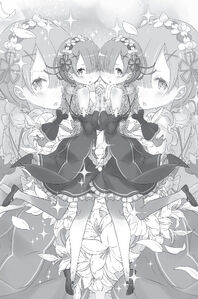 Rem and Ram greeted Subaru Natsuki as he awoke in Roswaal's mansion. 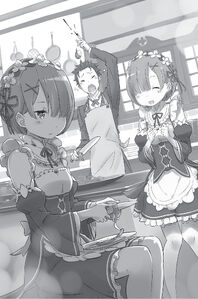 Rem and Ram cooking with Subaru after he became a servant of the mansion. 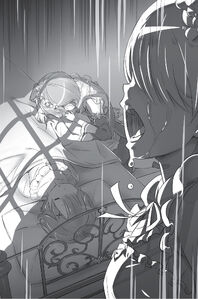 Rem passed away from a curse in her sleep, leaving her sister behind to mourn her loss. 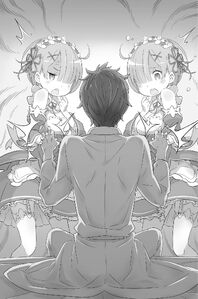 The twin sisters' hands were grasped by a newly awoken Subaru, shocking them. 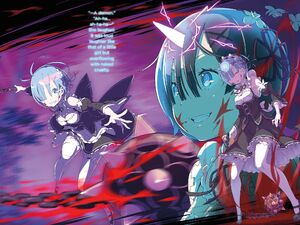 Rem in her demon horn state during the battle with the mabeasts. 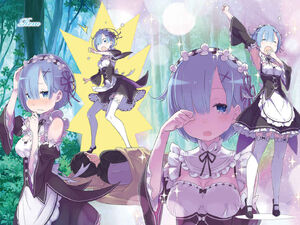 Rem in the fifth light novel. 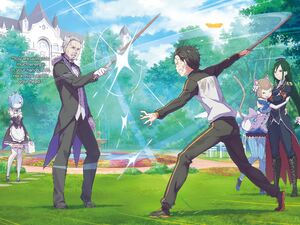 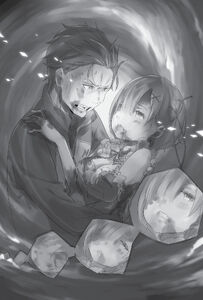 Rem professing her love to Subaru as she passes away. 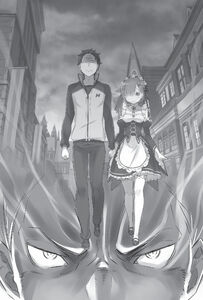 Rem walking through the streets of Lugunica with Subaru. 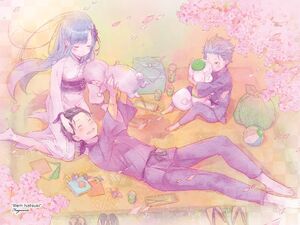 Rem & Subaru having a picnic with their family in an alternate timeline. 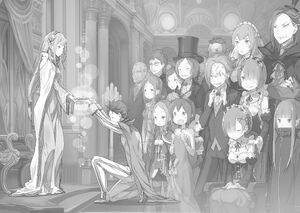 The unconscious Rem witnessed Subaru's knighting from a wheelchair. 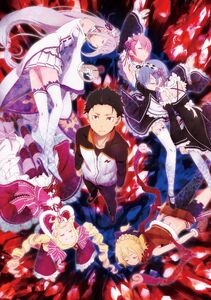 Rem (top right) on the second key visual for the first season of the anime adaptation. 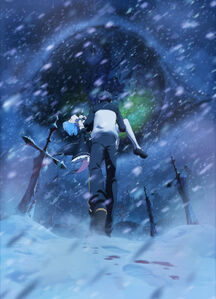 Rem's corpse being carried by Subaru on the third key visual for the first season of the anime adaptation. 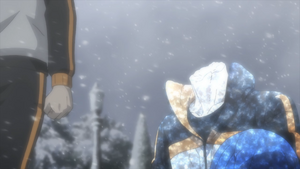 Rem's corpse held by a headless Subaru in Realize, the first opening of season two. 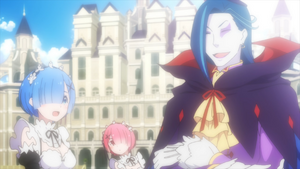 Rem with Ram and Roswaal in front of the latter's mansion in Realize. 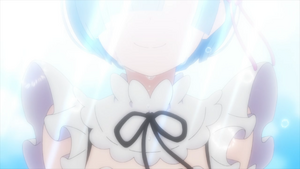 Subaru's memory of Rem in the Realize opening. 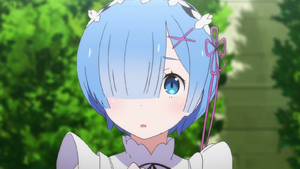 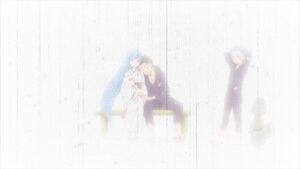 Rem with her husband Subaru and their family in an alternate timeline. 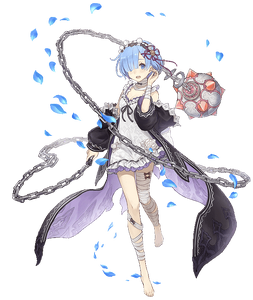 Artwork of Rem for the video game SINoALICE.
Add a photo to this gallery

Retrieved from "https://hero.fandom.com/wiki/Rem_(Re:Zero)?oldid=2008759"
Community content is available under CC-BY-SA unless otherwise noted.