No information
Remington was once the Chief Constable of the Echidna Security Team, a position just below Knuckles in maintaining law on Angel Island. Remington was the one Knuckles frequently turns to when his usual methods fail to work, and Remington's underworld resources have been helpful in the past.

Remington is a brown echidna with blue eyes. He has dark black/brown hair and slightly bushy eyebrows. Originally as constable of the EST, he wore a green uniform jacket, tall blue boots, and a green or tan wide-brimmed hat with a green hatband and beaded tassel. He sometimes wore a helmet with a clear visor in lieu of his hat Remington was meant to be iconic of the fate of the echidnas at the time. He was weary in appearance, wearing baggy green pants, orange and green gloves/shoes, a torn white shirt with a green insignia, wraps on his arms and dreadlocks, and manacles on his wrists and ankles. He was later corrupted mentally and physically changed to resemble his late father Kragok with the addition of a cybernetic right eye and left arm. At this time he also wore a dark cloak.

Remington's body was eventually restored and, adopting the simple clothing of the besieged echidnas, he now wears a simple green robe with a tan belt, white gloves with green and tan cuffs, and brown sandals. He also gained a new set of clothing apparently designed for combat.

Because of his position, Remington often found himself pitted against the Dark Legion, to whom he has a secretive connection. Unbeknownst to him-at least initially-Remington is in fact the son of the late Grand Master Kragok, who apparently sent him to Echidnaopolis out of mistrust for his sister, Lien-Da, showing the only real kindness Kragok has ever had towards his family. Technically, this blood connection also makes him a distant relative of Knuckles and the Brotherhood of Guardians, as well as the nephew of Lien-Da and Julie-Su, and the great-great-great grandson of Dimitri. He is also the boyfriend of Komi-Ko. He has brown fur, blue eyes and is 27 years old.

Remington first appeared after Dr. Robotnik's Ultimate Annihilator erased the barriers between Zones, bringing Echidnaopolis back to Angel Island. Together with Knuckles and Guardian Hawking, he worked to control the populace in this tumultous situation as well as to handle the antagonism of the Dingoes. He also worked together with Knuckles and the Chaotix to deal with a number of threats, including a handful of minor criminals and, ironically, the Dark Legion. One particular instance found him a captive of the Dark Legion android Benedict, who tried to blackmail Remington into supporting the Legion's takeover of the Echidnaopolis government. Needless to say, Remington refused. The Constable and his aunt were also the first to learn of Knuckles' death at the hands of Mammoth Mogul's Chaos Siphon.Perhaps as a result of examining Knuckles immediately after the Guardian's passing, Remington was unwilling to believe that Knuckles had come back from the dead, and ordered his team to exhume the Guardian's grave, which was found to be empty. When the Robotnik-backed Dingoes took control of Angel Island, Remington was imprisoned until he and others were liberated by Sonic, Knuckles and the Chaotix and brought to the safety of the Dark Legion base. During Hunter's subsequent attack on the Legion to steal the Master Emerald for Robotnik, Remington attempted to hold him off, only to be seemingly vaporised by the Overlander's Chaos Spear. In truth, he and Hunter's other victims had in fact been teleported via Chaos Control to Robotnik's Egg Grape Chamber, where their life energies were slowly leeched to power the scientist's weapons. When the Egg Grapes were disrupted and all the people within were drawn into the Zone of Silence, however, Remington was not among those lost.

Freed from the Egg Grapes by Doctor Finitevus, who had plans to use Remington as the basis for a new Enerjak, and learning of and embracing his Dark Legion heritage, Remington-most of his memories apparently erased by the effects of the Chamber-took over Grand Mastership of the Frost Legion in the civil war. In this guise, Remington wears an identical black cloak and has the same design of bionic arm as his late father, though his right eye is the one that was replaced by a similar implant, rather than the left like Kragok's. While he and Lien-Da clashed for some time, they put aside their feud in order to deal with a more urgent threat: that of Dr. Finitevus' plan to restore Enerjak

In reality, Finitevus had falsely promised both Grand Masters a share of the Emerald's power, but pulled the ultimate double-cross by allowing Knuckles to absorb its power and transform himself into the new Enerjak. Remington then led his forces in a desperate attack in hopes of overcoming this menace, but Enerjak proved too strong. Far from being the monstrous villain he once was, though, Enerjak restored Remington's normal body and his memories, doing the same to the rest of the Dark Legion and transporting them-with the exception of Lien-Da and a few others-to Albion. Remington became the leader of the new community that began to rebuild there, and even found a disk detailing Dr. Finitevus' origins and the fate of the original inhabitants of Albion.

A powerful presence as always, Remington soon took charge of the Echidnas in Albion as they began to build a new life amidst the ruins of the destroyed city. Early in the rebuilding, Remington found a recording device detailing the origins of Dr. Finitevus, which he played for Locke when the Guardian arrived unexpectedly. Thanking Remington for his help, Locke turned over the Echidnas' protection to his former subordinate, trusting Remington with the safety of their people. He would later watch with others from Albion as the battle between Enerjak and Super Sonic lit up the sky, and was quick to recognize Enerjak as the source.

Remington took to his new task with a will, organizing construction efforts rapidly and in a way that brought some comfort to Knuckles as he watched them during a brief trip to the surface, observing the Echidnas with guilt over his actions as Enerjak. Many of the Echidnas were pleased to work under Remington, and even his old girlfriend Komi-Ko watched on with admiration as he led the reconstruction efforts. Eventually Lara-Le took command of the refugees and Remington formed a new version of the E.S.T. comprised of former officers and Dark Legionnaires.

Unfortunately, the peace of their new homeland was short-lived, as the Death Egg Mark 2 arrived and deposited Lien-Da and her New Megaopolis Dark Egg Legion in the city, along with the robot Metal Knuckles, before departing. Remington took charge of the defenses, leading the new E.S.T. in a desperate battle against the Legion. Unfortunately, with limited resources, they lost Matriarch Lara-Le and her staff to the Legion, and were at a loss to deal with the Legion's superior armaments. In desperation, Remington attempted to contact Angel Island, and unknowingly got through to Knuckles. Other help came in the form of Team Fighters, who arrived and joined Remington's forces. With the additional aid, Remington revealed his intention to get the people out of Albion and into mainland Mercia, where they intended to ask King Rob o' the Hedge for asylum. He was then grieved to learn of the apparent demise of the Brotherhood of Guardians, but regained his composure to join in the assault on the Legion command post. The mission went badly awry, and everyone on Albion was knocked out by a reactivated defense system. Remington and all the Echidnas in the city were then imprisoned in another zone, courtesy of Thrash the Devil.

Honorable and dedicated, Remington has placed the safety of others above his own safety on numerous occasions. He has also been shown to be compassionate, contacting Locke about his ex-wife's wishes to speak with him, despite protocol prohibiting such actions. He also seems to like the finer things in life such as Oakmund cookies and Argylean tea. He is also shown to be an excellent leader, as he was the head of the E.S.T. and the Frost Legion and later oversaw the rebuilding of Albion. 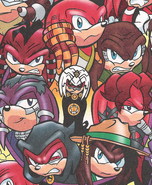 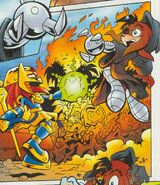 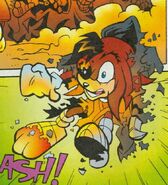 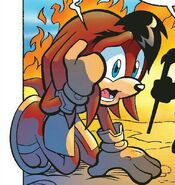 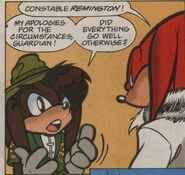