Hanging out with Jacob and Buford.

Kid Hero
Renée Ratelle is one of Jacob's best friends and she is also the deuteragonist of Jacob Two-Two. In the earlier episodes, she and Jacob had a rivalry and they couldn't stand each other, but eventually became closer friends. Renée often exclaims things with French phrases. She rides a skateboard, which has earned her the nickname 'Rattlesnake Ratelle'. She is the most intelligent student at Dreary Meadows, and she speaks with a French accent, including using French phrases.

She is voiced by Julie Lemieux who also voiced Soak in Keroppi and Friends.

Renée has yellow hair on her hair, black glasses on her face, and she also has a black shirt with green overalls on her and black jeans. She also wears green sneakers on her feet.

Renée is calm and cool, but sometimes like Jacob, she can be a little frantic and get carried away. She is nice and cares for her friends. 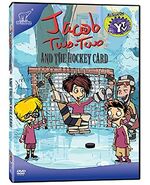 Add a photo to this gallery
Retrieved from "https://hero.fandom.com/wiki/Renée_Ratelle?oldid=1911749"
Community content is available under CC-BY-SA unless otherwise noted.