Member of Sword of Logos Northern Base

Training with the other Riders.

Defend the world against the Megiddo.

Ninja Knight
Ren Akamichi is Kamen Rider Kenzan of the Sword of Logos Northern Base and a hero in Kamen Rider Saber.

He is portrayed by Eiji Togashi.

Ren succeeded Amane Kagami as Kamen Rider Kenzan of Northern Base. He encountered Touma Kamiyama after he became the new Saber and joined Sword of Logos.

Following the defeat of Kamen Rider Calibur, Ren and the other Northern Base Riders were told by Reika Shindai that Touma had betrayed the guild. While initially doubtful, after learning that Touma was seeking out a possible traitor in the Sword of Logos based on the word of Calibur, Ren and the other Riders believed Reika's words to be true. Ren transformed into Kenzan and joined Blades, Buster and Slash in attacking Touma in an attempt to retrieve his Wonder Ride Books, but their fight was interrupted when Yuri intervened to protect Touma.

Tetsuo Daishinji and Ryo Ogami would later defect from Sword of Logos to join Touma's side, leaving Rintaro and Ren as the only remaining Northern Base Riders. After Kento Fukamiya returned as the new Calibur, seeking to seal all the sacred swords to prevent the destruction of the world, Ren approached him and attempted to reason with him. However, Kento became Calibur and attacked him, sealing his sword. Ren was then approached by Desast of the Megiddo, who took an interest in him and began following him around.

Ren and Desast were later attacked by Reika Shindai, who sought to retrieve Ren's Fuusouken Hayate now that he had deserted the guild. Reika became Kamen Rider Sabela and managed to defeat both Ren and Desast, only for Rintaro to suddenly appear. After becoming Kamen Rider Blades Tategami Hyoujuu Senki, Rintaro battled Sabela and managed to drive her off, saving Ren. Ren would later head off and be joined by Desast again after he regenerated. 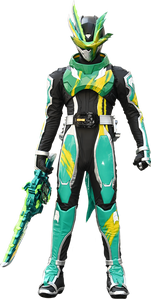 Kamen Rider Kenzan
Add a photo to this gallery

Retrieved from "https://hero.fandom.com/wiki/Ren_Akamichi?oldid=2304206"
Community content is available under CC-BY-SA unless otherwise noted.