The Residents of the Land of Light (光の国の住人 Hikari no Kuni no Jūnin) better known as Ultramen, are the main protagonistic alien race of the Japanese tokusatsu franchise known as the Ultra series. They are most well known for creating the Space Garrison and the Plasma Spark and live on Planet Ultra. The beings of lights are known for their great powers and strong sense of compassion and justice which motivates them to protect peace across the universe and between it numerous species. There are many Ultramen in other universes, each with different origins, some of which are similar while others are completely different. Some of the most well known Ultras include Ultraman himself, Ultraseven and Ultraman Tiga to name a few.

Ultramen are beings of light whose natural size is always that of a giant (the average adult is usually between 150 and 200 feet tall). They are usually red and silver (although several color variations have been seen in recent years) with yellow almond-shaped dome eyes (although there are exceptions to both the shape and color) and various abilities, most notably they are able to fire energy beams from various positions of crossed hands. Their primary weakness (in the Showa universe and a few others, this weakness is not absolute for Ultras of other universes) is a limited power supply, meaning that they cannot stay in giant form for long, usually no longer than three to five minutes. Ultras are beings of light and therefore feed on light but Earth's atmosphere naturally filters out most of the light that hits it, dwindling their energy supply. This is marked by a light, usually on their chest, sometimes on their forehead, called the Color Timer or Warning Light. It generally starts at blue, turns red and begins to blink with increasing frequency as the Ultra's power dwindles. 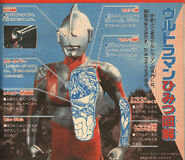 Anatomy of an Ultra
Add a photo to this gallery
At this point the Ultra has a few options; find a way to finish the battle as soon as possible, leave the Earth's atmosphere to recharge, revert to human form or risk certain death. An Ultraman does not have this issue in space and some series say that the problem is that the Earth's atmosphere is so badly polluted, regardless they can survive much longer in space where unfiltered sunlight reaches them, thus there is no time limit in space or on planets lacking Earth like qualities. To counter this time limit, an Ultra will almost always gain a human form or merge with a host. If the host was recently killed then the Ultras powers will revive them as they share a life force with the Ultra. Another thing of note, is the Ultras are apparently difficult to permanently kill, numerous times an Ultra has died only to be revived by another member of their species. Also a large amount of energy seems to revive them, usually supplied by their human allies, even when completely destroyed, such as Mebius who was killed by Alien Emperor and revived shortly thereafter by the life energy and bonds with his friends, combined with the nearby Knight Brace. Several Ultras have been killed in the Showa universe only to be revived 'in the nick of time' by another member of their species. It has later been stated by Ultraman Mebius, that though it is possible that an Ultra can gain a new life, there is no assurance, meaning the phenomenon is almost miraculous in nature.
Retrieved from "https://hero.fandom.com/wiki/Residents_of_the_Land_of_Light?oldid=1875660"
Community content is available under CC-BY-SA unless otherwise noted.